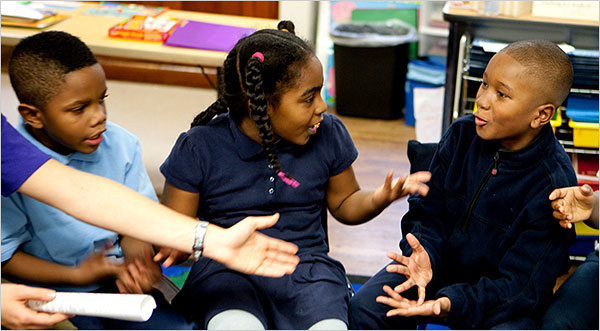 As a follow-up to Seth's post on teaching philosophy to children, I wanted to mention a New York Times article published in April on this subject: The Examined Life, Age 8. Second graders at a charter school in Springfiled, Mass. are being taught some philosophy via classic children's books like Shel Silverstein's The Giving Tree (you'll notice that Amazon comment-ers also seem to think the book is worthy of a lot of heated discussion).

Here's the exchange between second graders as quoted in The New York Times:

“It’s only a tree,” Justin said with a shrug.

“The tree has feelings!” Keyshawn replied.

Some reasoned that even if the tree wanted the boy to have its apples and branches, there might be unforeseen consequences.

“If they take the tree’s trunk, um, the tree’s not going to live,” said Nyasia.

Isaiah was among only a few pupils who said they would treat an inanimate object differently from a human friend.

“Say me and a rock was a friend,” he said. “It would be different, because a rock can’t move. And it can’t look around.”

This gave his classmates pause.


I love the enthusiasm and upturned hands in the photo above, reminiscent of Raphael's School of Athens (zoom in to the center):

The professor behind this project has written a book, Big Ideas for Little Kids: Teaching Philosophy Through Children’s Literature, and is "is assessing whether his program helps in the development of argument and other skills." As Seth points out in his post, children can learn critical reasoning through other fields as well; but as MemeGene points out in his comment, perhaps philosophy is uniquely accessible to children.

In fact, Freud speculated that during a "latency period" --  between chilhood and pubescent sexuality -- children develop a more organized superego; which is to say they begin identifying more strongly with parental and cultural values and deepen the capacity to feel guilt when transgressing them (they have internalized the function of punishment). And so during this period children are naturally interested in questions of right and wrong, or what is truly valuable and what is not. Some of these concerns are -- to say the least -- sidelined for a while once we become interested in the opposite sex (or alternately, Dungeons and Dragons).

I would add to this that the subject matter of philosophy is just uniquely important, period (i.e., to thinking about what kind of life to live), and the younger we get introduced to it the better. But I like the way the kids put it:

But the pupils in Ms. Runquist’s class said they liked philosophy because it involved reading good books and expressing themselves.

“We can say things about what we believe and stuff,” a girl named Autumn said. “It’s what we feel and what we think.”

I'll second that: philosophical discussions let us say things about what they believe and stuff.