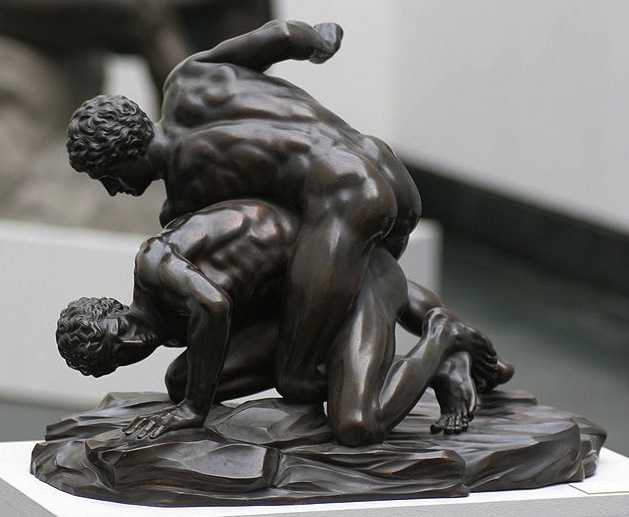 Here's an article by the University of Melbourne philosophy professor and poet Damon Young (who did actually write a book called Beating and Nothingness),

defending martial arts against those that would dismiss all fighting as mere savagery:

What do you readers think of this connection? Personally, I'm resistant to it. Yes, exercise is in pretty much all cases beneficial, and I don't deny the artistic aspect, or its ability to channel physical aggression. The activity is fine in itself, and I find Young's claims in this article pretty uncontroversial.

Now, I did martial arts for many years as a kid, and I currently participate in a sort of boot camp at a martial arts center (aimed at fitness, not really technique). Yes, I see the Zen-like concentration thing, the controlling your body as controlling your mind. In my case, I also see my fitness regimen as a private hell that I only put up with because it's preferable to turning into a giant slug and because for logistic reasons it works in better with my life than alternative exercise regimens. When I'm kicking the bag 200 times or jumping back and forth over a line, I do my best to turn my brain off. The activity makes me bleary rather than focused, and I'm desperate for anything (the usually dreadful music playing, the bodies of those around me) that might distract me from my personal discomfort.

So I'm prejudiced right now given how atypical and unmartial my particular participation in this sport is, and purely on aesthetic grounds the thought of someone who's trained up to be a black belt in whatever walking around thinking he's an ubermensch a la Kevin Kline's character in A Fish Called Wanda makes my physically ill. I also can't say I'm in general a fan of physical confrontation as sport. If some dudes want to take the ball that way, my instinct is to let them, or help them out, or ask them what's up rather than jumping in their way to stop them. The actual fighting part of martial arts, or boxing, or wrestling, is pretty grotesque and foreign to me at least: a drug that I have no wish to take.

So, what's it gonna be? Is there something to this, or is a Zen and the Art of Philosophy approach a load of pretentious douchebaggery? Share your experiences and cool things you've read!