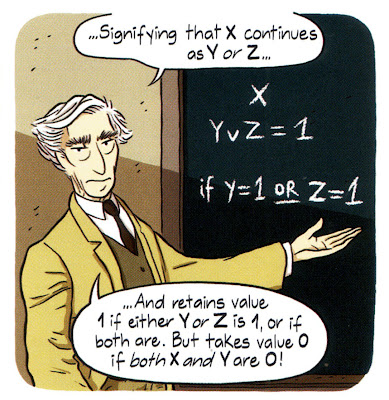 In the recent Frege episode, Mark related the famous anecdote of how Bertrand Russell, the man who "discovered" Frege, later confounded him by pointing out a paradox apparent within his logical system. As Wes recounted, Russell's own attempt to ground mathematics in logic was also later frustrated by a young Kurt Gödel, whose early incompleteness theorems crippled the central purpose of Principia Mathematica.

Anyway, those of us who suffer nausea upon seeing the character ∀ can nevertheless relive those heady days with Logicomix. A comic book about the quest for absolute logical certainty makes an unlikely choice for an award-winning New York Times bestseller, but I must say its an entertaining read. To steal a brief recap from the NYT book review:

The story spans the decades from the late 19th century to World War II, a period when the nature of mathematical truth was being furiously debated. The stellar cast, headed up by Bertrand Russell, includes the greatest philosophers, logicians and mathematicians of the era, along with sundry wives and mistresses, plus a couple of homicidal maniacs, an apocryphal barber and Adolf Hitler.