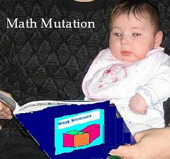 In the Russell episode, I brought up "new math," whereby young people were taught set theory. The podcast I was referring to was Math Mutation Podcast #145: "Why Johnny Couldn't Add." Given how short the episodes are, it appears as if the author (Eric Seligman) has actually posted transcripts. Here's the one on new math (and he provides unannotated links to a couple articles on the topic), and here's another that discusses the life of Bertrand Russell as described in Logicomix.

From that episode, here's an account of the writing of Principia Mathematica:

Russell then went on to work with Alfred North Whitehead on the Principia Mathematica, a massive work that was supposed to finally establish solid logical foundations for mathematics from the ground up, based on set theory augmented with 'types' to solve Russell's Paradox. Numerous times over the decade they worked on it, Russell would find some basic flaw and insist on starting over from scratch, driving his partner nuts. After this project, they never collaborated again. Finally they reached an acceptable version of their first volume, which took over 300 pages just to prove 1+1=2, and had to pay to self-publish it because the publishers estimated that so few people would actually read it that it would result in a net loss financially.

The podcast as a whole looks interesting: "where we explore fun, interesting, or just plain wierd corners of mathematics that you probably didn't hear in school." Check it out and let us know here of any episodes you'd especially recommend with philosophical content.