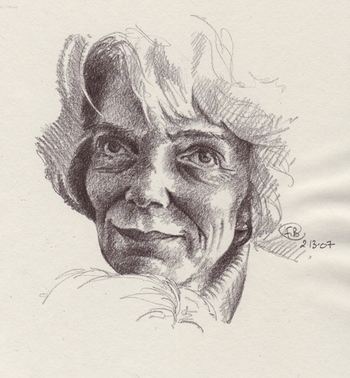 For folks that just wanted to hear Pat talk a bit more about her book, focusing on the bits she wants to focus on rather than what we pushed her toward, here are a few video selections:

In this video from her publisher's web site, she gives a short monologue summarizing Braintrust.

In this one, she's interviewed by Roger Bingham of The Science Network.

I've got some additional links to lectures and podcast appearances by her on this post. One of those was for a lecture at Edinburgh University, and I found a video version of that:

Here's one from a Canadian TV show called The Agenda:

Here she talks to a group of students about moral responsibility:

Image Note: the sketch is by France Belleville-Van Stone.