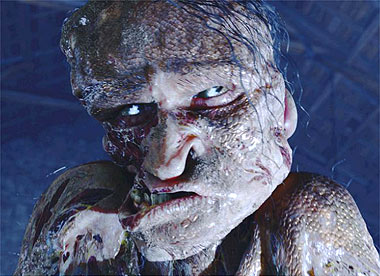 Entirely relevant to our feminism episode is this film directed/adapted by John K. from "The Office" from the novel by David Foster Wallace, which I've not read.

Is it amusing to see numerous comic actors give monologues that display keenly that self-consciousness--philosophical reflection--does not guarantee virtue? Yes. Does it (in its cinematic form) amount to a coherent thesis on how feminism has affected men (that this is the purpose of the interviews is not revealed until the last minute of the film, so my asking this is a spoiler, but I can't see how knowing this would matter much to a viewer)? No, not that I can glean.

We've got a guy who takes advantage of his amputee status to manipulate women into sleeping with him. Another taking advantage of a woman's grief to sleep with her even as he sympathizes with her. A man who serially reveals to women that he has intimacy issues that he should have revealed earlier, implying that because he's revealing these issues, the cycle must be breaking (it's not). We have repeated thoughts and hopes by men that a woman can save them from the horribleness that is them. And ultimately all this sexism and dysfunction becomes related to tales of sexual assault: a person can treat another person as an object, a thing, in a variety of ways.

I guess the point is that we men can think these things through all we want, but it doesn't keep us from obeying our baser drives, from trying to take power and avoid responsibility, from isolating our core selves seemingly on purpose.

The depictions may be caricature extremes, but basically ring true, and touch on trends that many folks will relate to. There's nothing in the film that forces you to take it as a generalization about all men, though the fact that every single man encountered in the film is screwed up in comparable ways sure suggests that. I attribute this more to the film's narrative viewpoint: we see through the eyes of the experimenter, a female graduate student whose recent personal history with men has been harsh. She's trying to understand why men (in her experience) are so consistently dickish, even when they display a wide range of different idiosyncracies. The range reminded me of the male characters in Herland; some men miss by being too aggressive, but it's equally easy to objectify by being too "romantic:" putting women on a pedestal and still not treating them as human.

Whatever the overall gist, there are some brilliant moments and a few insights that hit home. You can also watch it in small chunks, if that's a plus for you.