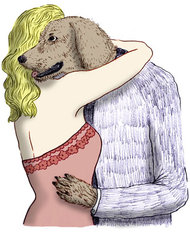 Though we've not had a link to an article in The Stone for a while, I encourage you all to keep a look out there, as it's a steady source of interesting articles.

I can't resist throwing up a link to this article by Kelly Oliver: "Pet Lovers, Pathologized," as it hooks into both our moral sense and feminism episodes.

Our inconsistent treatment of animals is one of the key signs that something is wrong with our cultural values. I've got a new puppy in the house now, and like any responsible pet owner, I acknowledge a real moral responsibility toward her. It's very much like having a toddler in the house, and if I really just considered her property or a toy or something, I wouldn't put up with any of it. But the issue is not just our hypocritical "I love my pets, but they have no moral standing" stance. As Ms. Oliver points out:

The animal rights and animal welfare debates continue to be dominated by discussions of whether and how animals have minds or intentions like we do. This discourse continues to measure animals against human standards in order to judge whether or not they deserve legal rights.

We were pretty dismissive of Peter Singer in our utilitarianism episode because thinking about moral respect for animals in terms of animal rights breaks down: so each animal counts as morally equivalent to a human, including mosquitos? As long as we see morality as a calculation (like the utilitarian), it's hard to see where animals could fit in (though they're much better about including them than Kantians: Read about the issue at the Stanford Encyclopedia of Philosophy).

Moral sense theory, being not about abstract rules (Churchland was pretty clear on this), better accommodates our reactions towards animals, and provides a good test case for discussing the progressive, transcendent character of a moral sense theory like Smith's. If our moral sense theory is too literal, i.e. we're just taking a poll of what people think about animal issues, than we might well have a lot of animal-insensitive people reinforcing the attitudes that Oliver is complaining about in the article. It's only through an ongoing dialogue that we negotiate toward a social view that a pet lover's respect for animals is nothing to be ashamed of, and needs to be accommodated in a rational moral framework. This is a case where, invoking Mill's notion of competent judges, I can confidently say that the pet lover simply has a greater insight than his insensitive opponent. How to best update ethics to give animals their due is complicated, and I'm not confident about the details, but I can say that a human-rights-based approach a la Kant is fundamentally flawed. The point for the moment is that that this kind of deliberation can fit within the moral sense theorist's project: though ethics is based on an appraisal of our current moral reactions (and our judgments in hindsight about those reactions), the notion of the ideal observer allows us to make use of the ideas of competent judges and social progress.

A bit of background: Kelly taught at U. of Texas when we were there, leading us (Wes and I) through a punishing intro to continental course required for all philosophy grad students, and Seth knew her better than we did. She's a big-time feminist philosopher (Kristeva and the like), and though I will admit that I did not enjoy her writing or her teaching at the time and was not particularly polite about expressing that, I'll also happily admit that I was an immature, egostistical boor. Progress is possible!