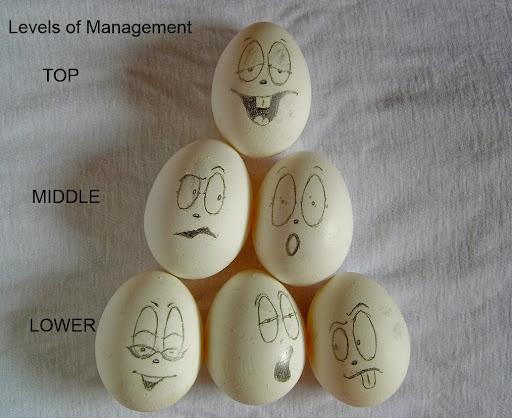 In Pt. 2, I described Pirsig's notion of dynamic vs. static quality, which should sound a lot like naturalistic moral intuitionism as discussed in our Hume/Smith episode. All there is is people (or, more widely for Pirsig, any being that is capable of reacting affirmatively or negatively to anything: judging agents, we might want to call them), and morality can only be founded on the moment-to-moment judgments of value that we issue, because there's simply no other available ontological source for a good empiricist. But to avoid this collapsing into a whimsical subjectivism, we have to say that these judgments get ossified into systems, and in many cases, we'll want to listen to the established system instead of our whim. But how do you decide in which cases to do this, and how to you judge between the different established systems? Pirsig proposes a hierarchy of purpose-generating systems to help clarify conflicts (this is from 158-9 of Lila):

What the evolutionary structure of the Metaphysics of Quality shows is that there is not just one moral system. There are many. ...There's the morality called the "laws of nature," by which inorganic patterns triumph over chaos; there is a morality called the "law of the jungle" where biology triumphs over the inorganic forces of starvation and death; there's a morality where social patterns triumph over biology, "the law": and there is an intellectual morality, which is still struggling in its attempts to control society...

What is today conventionally called 'morality' covers only one of those sets of moral codes, the social-biological code. In a subject-object metaphysics this single social-biological code is considered to be a minor, "subjective," physically non-existent part of the universe. But in the Metaphysics of Quality all these sets of morals, plus another Dynamic morality, are not only real, they are the whole thing.

In general, given a choice of two courses to follow and all other things being equal, that choice which is more Dynamic, that is, at a higher level of evolution, is more moral. An example of this is the statement that, "It's more moral for a doctor to kill a germ than to allow the germ to kill his patient." The germ wants to live. The patient wants to live. But the patient has moral precedence because he's at a higher level of evolution... it is absolutely, scientifically moral for a doctor to prefer the patient... It's true for all people at all time... a moral pattern of reality as real as H2O.

So Dynamic Quality is the ultimate arbitrator, but not all moment-to-moment judgments are a matter of authentic Dynamic judgments, where we're really in touch with our surroundings and reacting to them in the Zen-like way he's recommended that we do. We could be, in a given reaction, acting on some static directive from, for example, the biological (instinctual drives) or social (conventional mores) levels.

Why are these more evolved structures morally superior than the older ones? This seems self-evident to Pirsig: he builds it into his definition of "Dynamic," and presumably, he thinks we participate in all of these levels and so have an experiential understanding of the difference between them: we understand that it's better to have a seemingly novel thought than to obey the group or feel pushed along by our urges or be subjected to gravity (i.e. fall). This, then, is the meta-ethical framework that is supposed to decide moral conflicts, even if in some particular circumstance it might be difficult to tell what the source of some motivation is.

This drives Pirsig's analysis of society throughout the book. Conservative morality is Victorian, he says. It had a Hobbesian purpose, and we should acknowledge its moral supremacy over the biological urges which it was designed to keep in check. Intellectuals are right, though, to deny that conventional morality gets the last word: we should analyze specific situations in light of Dynamic Quality. To dredge up my standard test-case example, gay marriage should get a pass for Pirsig, I think: it's not a chaotic removal of all structures to let in barbarism, but merely a recognition that prohibiting a consensual, organized union of this sort doesn't do anyone any good.

Society has a legitimate interest in keeping people in line, and that historically included suppressing ideas that would have led to its downfall. When it tries to beat down a Galileo, though, then society is intruding on the intellectual domain, which is immoral on this view.

Neither of these examples, though, should lead one to reject society's dictates altogether, and this is exactly the overreactive mistake of the hippie movement, according to Pirsig. In rejecting irrational Victorian strictures, hippies rejected both the social and the intellectual, in favor of the biological, i.e. just doing what feels good, which is in fact a lower level than either of the things it's rejecting. The result is anarchy, and the fact that legitimate cultural innovators found themselves in league with common criminals against "the man" during the 60s cultural revolution is evidence that something was going wrong.

One could draw a parallel with to Foucault: yes, society is exerting power on us, but it's not necessarily all illegitimate power. There's an internal logic behind all of the measures society takes here. There are some ready contrasts here, as well, though. For Foucault, social strategies are constantly evolving, and we can't even reduce these movements to what some particular individuals think to be correct; the notion of "political economy" for Foucault points at some complicated social edifice. Pirsig also talks like this sometimes, e.g. in talking about New York City as being like a giant, a field of dynamism that has developed a zeitgeist without anyone in particular intending it. However, he more often seems to talk about the morality of a given society as highly static. More importantly, Pirsig thinks of Dynamic Quality in the individual case, and intellection more generally, as capable a la Plato of piercing through biology and social conditioning to get at truth (albeit a Dynamic truth that can't be characterized rather than some sort of static and eternal Good, which is how he characterizes Plato).

I take it that Foucault would have none of that: we simply can't escape the bounds of culture in this way. However, in any "the culture controls what I think" kind of view, there's still room for innovation, though this is not easy to explain (this is the problem in discussing Foucault that Katie set for herself in her dissertation). You may as well call this sort of innovation intellectual Quality, i.e. good ideas, that we can use to escape domination by the social. Again I'll use gay marriage as the example: society gives us the idea and practice of marriage (stable social groups for a stable society), which, if we understand it (meaning that understand what makes in general for a good marriage and what makes for a bad one), we understand maturity, commitment, love, fulfillment, so it's a matter of logic, more or less, that what's good about this would work just as well for folks who find these things with the same sex, even though same-sex coupling is not part of the idea that society foists on us. This is dialectic: we inherit ideas, but those ideas always carry within them the seeds of their own evolution. You can talk about recognizing these seeds as a matter of intellectual Quality on the part of individual moral innovators, or you can have a view of a more blind/group evolution a la Foucault (or Marx).

This idea of multiple levels of explanation for our motivations, and more generally the idea of emergence deserves multiple podcasts on our part; I'm not going to make much progress on it here. Pirsig doesn't demonstrate recognition of the complexities of his position: How exactly do these levels rise out of each other? What exactly is their relation to our experience (phenomenology)? ...And most evidently, he takes as obvious the position that the "higher" levels are morally superior, and he applies this very literally in some of his comments. The mass of unthoughtful people is not worth much, seemingly; the social institutions we create have greater objective value than mere biology. A philosopher exuding Dynamism is going to be objectively worth more than a person who mostly just reflects his social/biological programming.

But why should later evolutionary developments be by definition better than earlier ones? The primary insight of Darwinism is that while there's a causal explanation for any change, and teleological explanations for some changes, many changes are accidental, and not ONLY good ideas (in any sense) spread (read Dennett for more detail on this line). Nietzsche argues that a lot of our folly is a result of our forgetting our biological and animal origins, that a more sensible approach to ethics and and culture has to take these into account. In the gay marriage example, the missing piece in the moral evolution is fundamentally biological: a society that insists on solely heterosexual couplings is ignoring a biological fact and so is irrational. But realizing this irrationality is intellectual.

I think Freud gives a more instructive picture here in his view of the ongoing conflict between the biological and the social. For Freud, it's just asinine to say that the social is always better than the biological. The social serves a purpose, but since it can never wholly win over the biological, then there is room to optimize the social to better serve biological needs. In fact, you might even see the intellectual as a byproduct of this conflict: society is trying to keep down the inner animal in us, and all that animal energy then gets channeled into thinking. Far from being two steps beyond biology, the intellectual, on this view, is through and through biological, and certainly doesn't reach to some superior intellectual sphere. (This is more Nietzsche.)

So, I think the relation between these three levels is much more complicated than Pirsig thinks, and consequently the attempt to use the hierarchy as a foundation to bridge the is-ought gap and stave off thoroughgoing relativism that Pirsig thinks lead to nihilism just doesn't work.