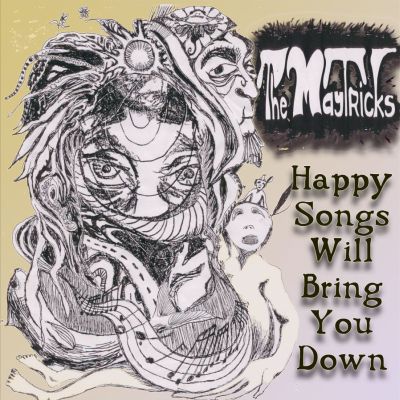 Go check out the album.

I've posted several times before about my college band, The MayTricks, which was active from maybe early 1991 through the summer of 1994, after which I left Ann Arbor for graduate school in Madison. It was a pretty weird group of guys with a lot of ideas and enthusiasm.

Since I knew I was leaving many months before this point, a lot of late '93 and '94 was spent putting together as many songs as we could finish into a massive double album. All the actual recording was completed before I left, though the mixing process stretched for some months afterward, and I took more months to work on the liner notes.

Consequently, the album never received a proper release at all, and the other guys, finding a double album with many songs by someone no longer part of the band not useful for their current promotional purposes, actually took 10 songs off of it and made a single album, "Fingers," to support their new band (also called Fingers). That Fingers album was the first product I was involved in to be put on CD, promoting some other band, with another bass player's picture on it. A bit disappointing at the time, given all the work that went into this.

Around 2002, Steve finally mastered it for CD, and I rescanned and made new awesome color liner notes (you'll have to order the CD to see them at this point, as I don't have them posted), and now I've gotten around to posting the whole thing, with noise reduction on some tracks, but otherwise the same lo-fi goodness crafted on a 4-track back in the day.

I felt this post necessary to call attention to the thing, because, for chrissake, it's 35 songs! ...And not 2 minute songs played live like the Ramones, but (for the most part) highly developed (given our abilities and crummy equipment) studio creations, with lots of bells and whistles.

As usual for a MayTricks album, there's no continuity in the style, but there are a few classes of songs here:

1. Some were recorded with the main instruments played live by the full band (like our previous album). This requires mixing the instruments in their final form as they're going into the 4-track, with rhythm guitar (or in a couple of cases, keyboard), bass, lead guitar (usually without the solos), and all the drum mics all put in proper balance as far as their volume, stereo placement, and any effects added to them. Vocals, guitar solos, and sometimes other things were added after the fact. These recordings tend to sound the best, because the main instruments don't then get bounced between tracks. Bouncing involves recording on some tracks, then mixing them to another track to make room for more recording, which means everything sounds one generation worse. Some good examples of these bounceless tracks include "A Few Gone Down," "False Morality," "Wonderful You," "Why Don't I Feel?" "I'm Gonna Steal Yo' Woman," and "Bankrupt." Had we just made an album out of the dozen or so in that category, it likely would have sounded slicker.

2. Some were new, intentional studio creations, still involving most or all of the band playing their parts separately, like "New Yesterdays," "The Cygnet," "When I Think of You," "Pen Pal Lover," "The Stone," and "Pure as Silk." Many of these still sound quite good.

3. Some were begun as solo recordings, with one person doing all the parts. We had some of these on our first album too, and often these were ones that were ready but didn't make it onto our first album, like "Pigs at Night" which is all me back from the summer of '92. However, in most cases, we made a point of going back and overdubbing/replacing some parts so that more band members were on them, as when Geoff and Steve added parts to my "Bring You Down" and "Healthy Song" or Geoff and I added parts to Steve's songs "Honor and Morality" and "Security." These are probably the most lo-fi on average; in some cases, they weren't envisioned even as album recordings, but we liked how they were filled out enough to use them. Believe it or not, there are still a few of my songs from this period that we weren't able to get to completing, and they keep nagging at me such that they'll have to turn up on this music blog eventually...

4. With such a thick tapestry being woven here, we felt the freedom to insert extra tunes like Steve's "Toil," which is just a layering of percussion instruments, Geoff's "Rusty Envy," which is just him singing and playing guitar, or my "Sorry," which is just something I tossed together with an acoustic guitar and many vocal overdubs. The weirdest of these is "Tencious Speaks," which starts off the album. I programmed a repeating keyboard riff, Steve and I jammed on bass and drums over it, and then we subjected it to several more rounds of overdubs, including horns (with Geoff on trombone and Cliff on trumpet). The jam as a whole is just a goofy mess, but I had a friend of mine read a goofy poem I wrote over the beginning of it, and then we faded in a later part of it as the chaotic track 33, "Thus Spake Tencious."

The other bit of album-unifying continuity is my little song "Messed Up People," which I used to play live just as it appears here: going into "A Few Gone Down." We'd long had in our live set a reprise to finish off a gig: for the first years it was "Wild Flower" from our second album, which we would open gigs with, and then at the end of the set we'd reprise it after playing our punk version of "The Brady Bunch" theme song (no, I haven't posted a version of that, but will do so at some point for the morbidly curious). At some point we switched the reprise to be of "Messed Up People," and that's how the album ends, with some full-band jamming and four part harmony, including a slow part that, should you actually sit through the whole 35-song album and get it, may well actually make you weep.

In any case, it all makes me terribly nostalgic, not least because one of our members (Cliff, discussed here) has since passed away, and I've not spoken to Geoff apart from a few monosyllabic emails for maybe a decade. Steve and I are still tight, though. Mostly it's a matter of a change from then in myself: I was working with much crappier technology back then and was much less developed as a songwriter/lyricist, and, as should be obvious if you listen, we weren't always that great about keeping things together rhythmically and tended to overplay, i.e. too many notes for folks of our modest instrumental means to really pull off with professionalism. Plus, I'm well aware of stylistic elements in some of what we did that are pretty off-putting to most people (though a familiarity with some of our influences helps, XTC and David Bowie being key among them). Still, there's a spirit of exploration, and some raw passion, and a heck of a lot of creative fun stuffed into these that my more recent work doesn't tend to match, even though what I do now is a hell of a lot more listenable than anything the MayTricks ever did.

Highlights (given that most of you are not going to actually download 35 tracks):
-Track 4, "A Few Gone Down" (reworked with better recording quality for a later album, but possibly not as well; Steve played drums on both versions, though, so they're pretty similar)
-Track 32, "I'm Gonna Steal Yo' Woman" (ditto; on the remade version, Steve and Cliff still sang backup but exchanged their parts)
-Track 12, "Conspiracy," (of my favorite Steve songs, with me playing some upright bass)
-Track 28, "Why Don't I Feel?" (another great, creepy Steve tune, with well-integrated tinkly percussion and some tight funkiness and full-band 4-part harmony in the chorus; I like Cliff's shimmery keyboards on this too and the jagged bridge part towards the end.)
-Track 23, "John T. Flibber," (one of my most fun mostly-solo tunes on here, over which Steve dubbed a bunch of percussion)