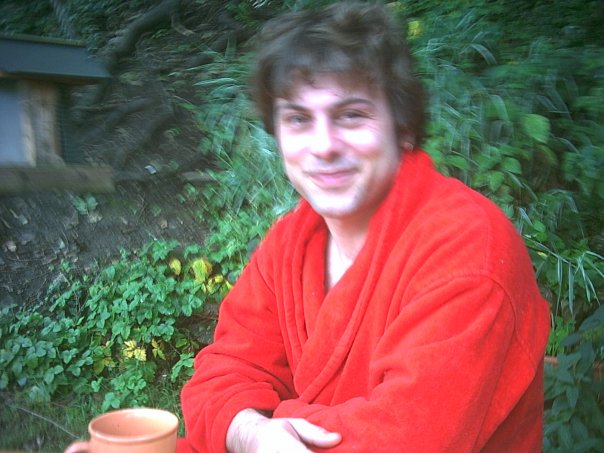 Erik was the very first PEL guest participant, acting as our more-knowledgeable-than-we-about-Eastern-philosophy go-to guy, and was actually one of those I'd spoken to before launching the podcast altogether as a potential host, but I thought that having to adjust to his British time zone would complicate things too much.

Here he is on our Taoism episode, and on our first Buddhism one, on Nagarjuna (Note that his funky, non-phonemic pronunciation--Nargoojana--was confirmed/repeated by Flanagan, so I lose that one.)

He was also a philosophy grad student at U. of Texas, though a couple years behind Wes and me, and I don't remember him so well from those days, nor did we really correspond all that much beyond planning the couple of episodes he was on. A primary interest of his was Zen/Chan Buddhism (i.e. the more anti-language kind that Owen Flanagan discounted in our interview with him), and I was just now tracking him down to talk to him about an eventual episode in that area, and to get his perspective as part of this round of Buddhism discussions. I discovered on his Facebook page that he passed away last December 5th. I don't know the details, but got the impression from a comment that he made in an email a while back that he had some recurrent health issues; he said that he was surprised to be alive at that point.

Erik's blog appears to be down, but you can learn about his activities on this biographical page. Here are some of his thoughts on academia and the science/philosophy distinction:

My background academically was originally mathematics and science. I was driven as an undergraduate and graduate student to understand the scientific nature of consciousness, but the nature of the questions quickly brought me to the liminal regions of science. Thus, I turned then to philosophy to provide a better cognitive framework to pursue answers to the above riddles.

My work in this area saw two kinds of fruit grow. The first is my reasonable certainty that "science" as sincerely conceived can approach the big questions surrounding consciousness and its origins. However, a serious need to look at the way we define our terms cannot be overstated. At root of greatest mystery in this poly-discipline - what is sometimes called the "Hard Problem of Consciousness" but which is just a dressed up name for the "Mind-Body Problem" - is the nature of time. Time or temporality itself is no less mysterious when approached honestly. It is my thesis that these two concepts (Time & Consciousness) are so related, they are likely of one in the same essence, and a physicalist understanding of either will lead to answers about the other. I believe that the necessary metaphysical foundations will likely be found in a complete theory of quantum gravity, and I am generally persuaded by Roger Penrose's thinking. However, I suspect that new kinds of temporal logic will need first to be developed. I have been involved with time researchers around the world, and I am developing an academic/general Website dedicated to these issues. On account of necessity, my energies have turned significantly to the political in the past two years.

The second fruit to grow was considerably more sour/bitter. I am now of a mind that the traditional institution of the academy is really in its death throws. That is to say, the social pressures of the past century have finally killed the spirit of investigation and exploration that first kindled in the Enlightenment, notably the influence of corporate and capital driven models of organization and respective definitions of goals and success. However, I remain an optimist with respect to the human spirit, and all of our crumbling ivory towers will in time be swept away into the dustbins of history.

Thanks for talking, Erik.