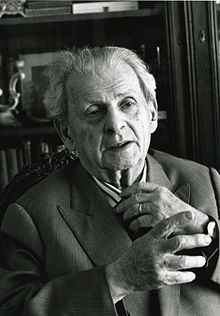 I was listening again to Mark's interview on Douglas Lain's Diet Soap podcast and was struck by an interesting question posed by Doug.  He was talking about how ontology seemed to be the starting point for philosophy (Thales) and asked whether ontology was required for ethics and if Mark knew of any philosophical points of view where the ontological contradicted the ethical.  Mark's response was to note his 'skepticism' with respect to ontology - his doubt that we can know the world 'in-itself'.  It's quite reasonable to think the ultimate nature of the universe is unknowable and even science resorts to metaphors to describe the ultimate 'stuff' of the universe (he mentions string theory).

Mark goes on further to say that if you have a skeptical stance towards ontology it seems kind of problematic to base ethics on it - particularly if you think of ethics as being immediately present to human beings as opposed to ontology.  Ethics is kind of 'in your face' in a way that things-in-themselves are not.  You can start the ethical endeavor from someplace other than ontology - in experience perhaps.  It is possible that ethics is primary:  'What should I do?' comes before 'What is there?'

This question put me in the mind of Emmanuel Levinas, who I was studying for my dissertation prior to going from fully to partially examining my life. His Wikipedia entry has a nice succinct section on this point:

[Levinas'] work is based on the ethics of the Other or, in Levinas' terms, on "ethics as first philosophy". For Levinas, the Other is not knowable and cannot be made into an object of the self, as is done by traditional metaphysics (which Lévinas called "ontology"). Lévinas prefers to think of philosophy as the "wisdom of love" rather than the love of wisdom (the literal Greek meaning of the word "philosophy"). In his view, responsibility precedes any "objective searching after truth".

Levinas derives the primacy of his ethics from the experience of the encounter with the Other. For Levinas, the irreducible relation, the epiphany, of the face-to-face, the encounter with another, is a privileged phenomenon in which the other person's proximity and distance are both strongly felt. "The Other precisely reveals himself in his alterity not in a shock negating the I, but as the primordial phenomenon of gentleness."[3] At the same time, the revelation of the face makes a demand, this demand is before one can express, or know one's freedom, to affirm or deny.[4] "

In short, the Other comes before any Object.  There is a sense in which this view makes a category claim about Others vs. Objects - they are wholly different.  This doesn't entail that one is prior to the other (and I suspect that at some point Derrida probably deconstructed that opposition).  If we at least grant the distinction between the two, I read Mark's comment as saying there are practical reasons for spending our energies on ethics instead of ontology and I am sympathetic to this view.  You can live your life never knowing what is-in-itself, but you will at some point in your life have to make a moral decision.  It's worth giving that some thought.

Levinas' ultimately will claim that responsibility for the Other is the foundation of our Subjectivity, taking Heidegger's notion of Sorge (Care) to it's logical conclusion with respect to other Dasein.  While I won't claim to understand what Levinas is really all about, listeners have probably caught on to the fact that the Ethical is of much more interest to me than ontology.  Metaphysically or practically ethical questions take priority for me.