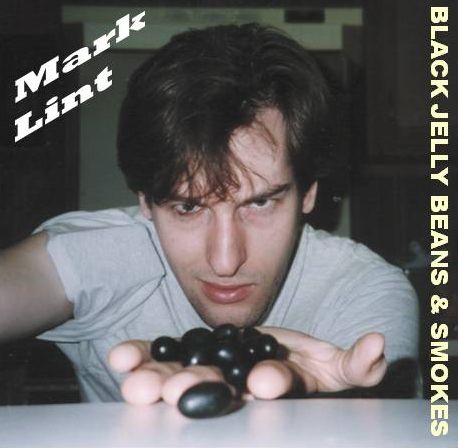 Go check out the album.

Our humor episode gave me an excuse to finally get this album all converted and posted for those interested. To quote my liner notes:

Black Jelly Beans are the ones that normal people with a fine taste for fine things pick out and throw to the weevils, but which certain freaky weevil-like individuals find quite to their liking, thank you...

Smokes (aka Spoo) are those silly (harmful?) indulgences that act to let off steam (smoke?), producing a small, noxious cloud, intoxicating to some and irritating to others.

So these mostly me screwing around in various ways: some are demos of decent songs ("Manager" and "Celebrity" both made it to New People albums), a couple are one-off collaborations (such as "Come On, Lady," found at the end of the episode, and "The Saga of El Kater," both of which were done with Brian my friend and Sklep co-editor, brother of Ken who drew the PEL icon and my recent album covers), a few are songs too embarrassing to make it into any other form ("Solitary Drama" and "Pass Time Incorporeal," both of which I've seen fit to tack on PEL episodes for thematic reasons). I've even got a Bob Dylan cover on there, recorded to impress a girl.

The album is dominated, however, by Spoo songs, the first and most entertaining of which was "The Nipple Song," which you can also hear at the end of the humor episode (I put "The Zoo Song" on the Foucault one). These are pretty much pure silliness: quickly slapped together and utterly meaningless, and yet I enjoy them even now.

Humor in music is easier than straight-up humor, because the music can remain entertaining even if the humor itself wouldn't stand up. There's a fine line between humor and a generally jovial or mischievous mood, and I tend to lace many of my songs with some kind of irony or other humor-ish elements without them thereby becoming novelty songs in the way that Spoo songs are. The fact that I think these songs all fit together on one album should tell you something about my views on humor, i.e. that it's part of an aesthetic continuum and has many gradations and purposes. This tends to be lost in a stand-up situation where the name of the game is to make people laugh or sit the hell down, but written humor, or humor in music that's intended to be listened to multiple times (meaning that it can't then be funny just due to its being unexpected), does not have such a singular focus. You'd have to go to monologists or theatrical pieces to get something comparable out of a spoken performance.

Ultimately, I think there's something sleazy and artificial about trying to be funny. (And yes, I know how this sounds given my mugging on the podcast.) Humor arises out of situations, or our of a feeling you have. So if you're telling a story about your day, or talking about a philosopher, and something funny comes up, great. Stand-up comedians have to manufacture a setting, to draw you in (as we discussed on the podcast) to a place where you can see what the comedian finds funny and laugh along. Sit-coms generally seem forced because they don't have time to actually let the situation settle in naturally enough to elicit natural humor; they have to have a laugh line every 20 seconds or fail (and good ones like "Seinfeld" build up characters and situations over time instead of relying on this).

So these Spoo songs, unlike novelty songs, are not attempts to be funny, and in many cases (e.g. "The Quiet Song") they most certainly are not. They're just screwing around... a self-amusing way of being-in-the-world. I will fully admit to fetishizing my little recorded children in general, but I still have quality standards and understand the distance between creator and listener such that most of my attempts are pretty polished, but you need to turn that around every once in a while and totally neglect some aspects of the production for the sake of some others. In the case of this album, it's about spontaneity, the removal of constraints, and not being afraid to prance about like a gibbering ninny. Though not all the songs were originally recorded with that spirit in mind, I take the whole with great swaths of irony, and it works OK (though, really, you should listen to pretty much any other album I've ever done first).

Recommended tracks to start with (not coincidentally, among the less silly of them):
-Track 10, "Sleep," is a demo of a harmony-heavy version of a song that had already appeared on an earlier album... pretty emotional.
-Track 5, "Manager," is dark little song written in frustration about not having a manager.
-Track 19, "Sad-Eyed Lady of the Lowlands," by Bob Dylan, but I recall feeling all haughty for daring to add a couple new lyrics to the harmony vocals which make up my main customization of this very long song.
-Track 9, "The Evening Standard," is my attempt to capture my very regular piano improvisations (piano being an instrument I don't really play) whenever I'd go to my parents house during collage. I then overdubbed it with a variety of grab-anything fake-orchestral noises, backwards sounds, etc.