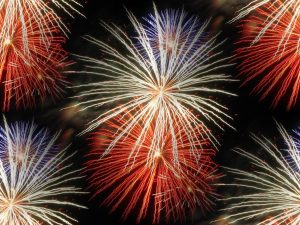 Gary Gutting reflects this Fourth of July on the morality of patriotism, which is grounded in a kind of in-group loyalty at odds with moral theories that require that we treat all human beings equally, regardless of whether we are part of the same family, tribe, or nation.

He notes that Alasdair MacIntyre has given a defense of patriotism:

Alasdair MacIntyre, for example, argues that morality is rooted in the life of a specific real community — a village, a city, a nation, with its idiosyncratic customs and history — and that, therefore, adherence to morality requires loyalty to such a community. Patriotism, on this view, is essential for living a morally good life. MacIntyre’s argument (in his Lindley Lecture, “Is Patriotism a Virtue?”) has provided the most powerful contemporary defense of a full-blooded patriotism.

Gutting doesn’t go into detail about MacIntrye’s reasoning, and I haven’t read the Lindley Lecture, but it’s not hard to imagine how MacIntyre would approach this problem. In After Virtue he argues that morality must be grounded in the ends of human beings, in the Aristotelian sense of end (or “telos”). For Aristotle, what is good for human beings are certain end-states toward which we naturally tend. These end-states perfect or fully actualize some set of dispositions, some potentiality. Just as an acorn will tend to develop toward an end that actualizes its full potential (Oak tree), human beings strive to function well in a way that is appropriate to human being. This functioning constitutes eudaimonia – “happiness” (understood in a particular way) or “flourishing” – which Aristotle takes to be “activity in accordance with virtue.” Virtues are kinds of things that constitute functioning well for a human being (“excellence), such as courage and temperance.

This is not to say such tendencies are necessarily conscious or that they can’t be thwarted: some acorns will not fall in the right kind of soil, and so may not fully develop (or develop at all). And some human beings will adopt ends that are at odds with their own nature: which is to say, they will have two sets of dispositions in conflict. One set of dispositions is determined by the kind of thing they are – by their human nature; the other by something particular to them, based on their idiosyncratic development. For instance, if John’s psychological development led him to become a serial killer, then he belongs to at least two kinds of thing -- or types -- with two respective sets of conflicting ends. Insofar as he is a human being, his natural end will be a certain kind of comportment to other human beings that generally doesn’t involve killing them. Insofar as John belongs to the type serial killer, or even the sui generis type John-the-Serial-Killer, he will have tendencies discordant with his nature. This kind of conflict is at the heart of an Aristotelian account of morality: it’s difficult to imagine how we’d account for the immorality of John’s serial killing activities if we thought he had ceased to be a human altogether and if his core nature were merely “serial killer.” It would be like trying to fault lions for killing gazelles: the lions are simply doing what they are made to do – in fact ideally they will be excellent at killing gazelles. Likewise with the serial killer who has ceased to be human.

As we have seen, our ends our determined by the type of beings we are. And while we may accept Aristotle’s account that there is one core kind of being that’s most important to establishing our ends (human being), it’s clear that each of us belongs to many “kinds” and that these kinds will determine various kinds of ends. I’m not just a human being: I also belong to a certain family, profession, nation, and numerous other groups and activities. And these groups and activities structure me -- alter the kind of being I am: they give me certain potentialities, toward which I naturally strive.

MacIntyre expands the Aristotelian account along these lines: he emphasizes, for instances, “practices.” If I start playing chess and hanging out with chess players, I internalize a certain set of skills and values. I’m altered by these activities: they give me new dispositions, one of which is to perfect just this set of skills. Chess may have meant little to me until I started playing it: but once I start, I create a new set of inward dispositions that will survive even my subjective loss of interest in chess. I become a chess-playing machine, so to speak, and this inner machine will have a tendency to preserve and actualize itself even after I’ve decided that chess is not what I want to do with my life and I’d better spend my time on other things. That’s why it might be hard for me to resist the temptation to play chess when the opportunity presents itself, for instance if I’m walking by players in a park. That’s not merely because chess is pleasurable and because I seek pleasure: rather, once I learned some chess, I started down the path at becoming good at chess – and now there is a built in tendency to become better and better at chess. The chess-playing part of myself strives for survival and actualization, and when I take up a game in the park I’m playing not merely for pleasure but for practice: I’m trying to get better at chess, and to continue structuring myself as chess player – or to become more and more a chess playing type of being.

So the activities and practices into which we enter not only give us a certain set of skills, but a tendency to continue to perfect those skills. Likewise, belonging to any sort of community will have the same sort of effect: insofar as I am an American, I’ll have a tendency to actualize and perfect some associated tendencies. In this case, I’ll seek to perfect those tendencies that allow me to form social bonds within the group and pursue its values (the “American dream,” for instance). I’ll also have the tendency to defend (including by violence) my group against outsiders. To the criticism that this is an irrational tribal loyalty, and if that I’d grown up in Norway I’d be read to lay down my life for an entirely different group, I could respond: it makes perfect sense for me to defend whatever group to which I happen to belong. Because while my belonging to a certain nation or group is a matter of accident, once I become altered by the group – once I become American – then it’s no accident that this part of me will seek survival and actualization. I’ll naturally want to see American-ness – my kind – survive and thrive.

Of course, one could give an Aristotelian response to this Aristotelian defense of patriotism: which is to say, I might fall in with the wrong crowd. Not every group is good for me. Ultimately, I have to revert to my membership in some core natural kind – the human kind – to judge the appropriateness of the effects that practices and groups have on me. They may give me dispositions that are at odds with my humanity and hence my happiness. So it’s conceivable, to return to our serial killing example, that the serial killer part of John thrives and flourishes at the expense of his humanity: he may be very happy qua serial killer, but very miserable qua human being. And of course, most cases are as extreme as this: as we grow our experiences structure us, and these structures take on a self-preserving and self-actualizing life of their own – sometimes to our detriment, to sometimes to our benefit. This structure is what we call “character” (and we can think of this more broadly no just in the Aristotelian sense, but the psychoanalytic sense, as consisting of “defenses”; and when some part of our character thrives at the expensive or ourselves and our overall happiness, we have Freudian “death drive”).

So the question then becomes whether being American, Norwegian, or belonging to any other sort of group or practice, is ultimately good for us or bad when measured against ends defined by our humanity. And this leads us back to a conception of morality which, while still Aristotelian, seems consistent with the kind of enlightenment moral standpoint – a universal one – that MacIntyre has used Aristotle to argue against.