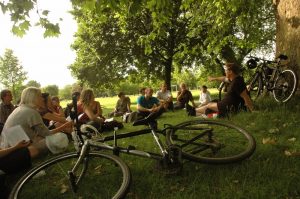 Apparently public forums for the discussion of philosophy are on the rise:

The London Philosophy Club, of which I am an organiser, is the biggest in the UK. Our 2,000 members include bankers, lawyers, therapists, advertising people and a few academics looking for a more social form of philosophy. We hold free monthly meetings in pubs, cafés, galleries, parks and restaurants. Sometimes we try to match the topic to the venue: last week a group met to discuss Italian philosophy in a pizza restaurant by the River Thames.

The rise in popularity of such venues over the last few decades is explained by an increase in university graduates, not to mention the availability of online educational material (PEL included we hope). But there's tension with academia:

The movement must also improve its relationship with academia. Academics accuse grassroots philosophy of incoherence, with grassroots philosophers retorting that academic philosophy is irrelevant. This mutual suspicion dates back partly to the shift from informal to formal education – the London Mechanics’ Institute, founded in 1823, eventually became Birkbeck College – and philosophy’s becoming, in the eyes of grassroots philosophers, increasingly specialised, theoretical and introverted (that image of the lonely philosopher again), losing its outward focus on improving people’s lives.

I don't think that the problem here is that philosophy is "theoretical and introverted" -- the inevitable result of deep study. And specialization is not inherently bad: it's a problem only when specialized to such a degree that you know nothing outside your specialty.

The real problem is salience: academics are not always good at figuring out what's important. So for instance, I find something perverse in the impulse to answer the scholarly question of whether Nietzsche was influenced by so-and-so to the exclusion a deeper engagement with his ideas. It's like horse race oriented political analyses that refuse to address the effectiveness of policies and instead focus on how well politicians are doing in persuading the public of their policies. It's a defensive retreat from a more difficult, interesting and important question to a less difficult, more narrow and scholarly question. These sorts of retreats are required because an academic career requires publishing on a certain schedule, and this schedule does not always line up with one's progress to date in, say, mastering the subject of epistemology as opposed to the provenance of a single paragraph in Kant.

I'm not saying that I'm entirely uninterested in such historical accounts, nor that academic philosophy -- and what is else there, really? -- is devoid of interesting work. Whatever interesting philosophical work is being done today, it's very likely being done in the academy. The point is that the academy also encourages a great deal of work that is more necessary for survival than conducive to flourishing.