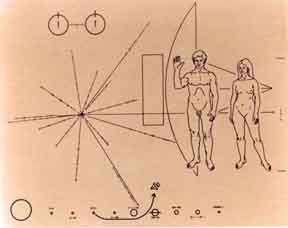 Dennis Overbye has a nice article this week in the NYTimes on the recently published explanation of the Pioneer Anomaly. As he explains,

The story starts with the Pioneer 10 and 11 space probes, which went past Jupiter and Saturn in the late 1970s and now are on their way out of the solar system. In the 1980s it became apparent that a mysterious force was slowing them down a little more than should have been expected from gravity of the Sun and planets.

Was there an unknown planet or asteroid out there tugging on the spacecraft? Was it drag from interplanetary gas or dust? Something weird about the spacecraft? Or was something wrong in our calculation of gravity out there in the dark?

The last question is really one about whether Einstein's account of gravity in General Relativity is showing any cracks. As Overbye notes, that would be big news indeed, given that the GPS system requires corrections rooted in General Relativity to achieve the precision it does (see Relativity and the Global Positioning System for some details if you're interested).

The solution determined by Slava Turyshev and his team at the Jet Propulsion Laboratory in California is that the spacecraft are slowing down due to asymmetric thermal emissions from the electronics and fuel source on board. Thermal means heat which means light. Light carries momentum and any light source experiences a recoil force opposite to the direction the light is emitted just like shotgun recoils against the bullet into your shoulder when you fire it. Now, it's not just that the Pioneer probes are thermally radiating (cooling off, effectively), but that they are doing so asymmetrically -- emitting more light from the front than the back. This leads to a net drag, slowing down the spacecraft. The same thing happens when you turn your headlights on in your car -- it slows you down. (Though, I wouldn't rely on it for braking at stoplights.)

You can read  article for yourself in Physical Review Letters or get the preprint version here. You can also read another account of the paper at arsTechnica.com.

I like this particular case for a number of reasons. First, the anomaly arises in the difference between what we expect to be the case and what we find to the case. Understanding is increased by trying to bring those expectation into line with those findings. Many options are entertained including throwing out the best theory we have so far to describe planetary scale physics. Just like the recent bruhaha over the hints that neutrinos travel faster than the speed of light. (It turned out to be a loose cable in the experimental setup.) It also reminds me of the early days of sub-atomic physics and the discovery of the neutrino. In the beginning all that was observed was missing energy. Our best, most honest explanations couldn't account for distribution of the energy of the electron in beta-decay. Niels Bohr openly considered whether or not we won't need to just throw out Conservation of Energy as a principle in physics. (Just as we had thrown out Conservation of Mass as a fundamental principle of physics not much earlier.) However, in the case of the neutrino there really was something new that hadn't been seen -- it really was new physics. In the case of the Pioneer anomaly, it's as Overbye says "You may dream of freaky new physics, but sometimes freaky old physics is all you need."

Second, it makes me reflect on the effect of scale, both in size/distance and in (for lack of a better term) detail, on what we consider to be true about the world and what is a good practical point of view. And, for that matter, what the real differences are between those two claims. I joked earlier that turning on your headlights slows you down, but the practical fact is that it doesn't matter one iota at my everyday physical scale. In order to worry about such things I need to be traveling gargantuan distances through deep space in order for the effect to show up with any significance. Does this mean that my "everyday" understanding about the effect of my headlights on the speed of my car is false? As an approximation, is it not true? This might be right for something like the effects of special relativity because there is one fairly straightforward parameter -- velocity -- that can be turned up and down. So, the world is truly relativistic and space is not Euclidean. I leave myself content with working with approximations most of the time simply because they are easier to work with. But even with this pragmatic disposition of the perpetual revisability of scientific understanding, it doesn't seem quite right to always consider the understanding of the beings and interactions at one scale simply false when one uncovers more structure at other (generally smaller) scales. Indeed, it's not at all clear that all of the large-scale properties of materials are embodied in the presumptively "more fundamental"  smaller-scale phenomena.