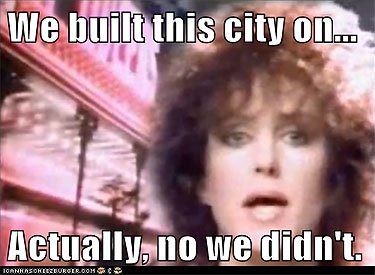 In this Washington Post editorial on Ezra Klein's Wonkblog by Dylan Matthews, we get an attempt to connect philosophy to current political discourse, with the conclusion "...which is perhaps why, in general, politicians don’t spend a lot of time listening to philosophers."

The issue is desert, as in "do rich people deserve to keep their money?" Matthews characterizes the majority opinion among philosophers on this issue as being that some kind of determinism, whether hard or soft, is true, so the notion of "desert" doesn't make sense, and thus philosophy is so divorced from common sense, i.e. the terms in which ordinary people couch their arguments, that we can presumably just ignore philosophers altogether.

Very relevant to Chapter 17 of MacIntyre's After Virtue, "Justice as a Virtue: Changing Conceptions," Matthews brings up both John Rawls and Robert Nozick, who, as MacIntyre also points out, have opposite views about the directives of social justice but neither of which couches their argument in terms of desert. MacIntyre states (p. 249-250):

Neither of them make any reference to desert in their account of justice, nor could they consistently do so... Rawls allows that common sense views of justice connect it with desert, but argues first that we do not know what anyone deserves until we have already formulated the rules of justice (and hence we cannot base our understanding of justice upon desert), and secondly that when we have formulated the rules of justice it turns out that it is not desert that is in question anyway, but only legitimate expectations... Nozick['s]... scheme of justice being based exclusively on entitlements can allow no place for desert."

MacIntyre is criticizing them on these counts, so Matthews is incorrect when he says in the article that desert is foreign to MacIntyre's view as well. However, it is hard to see how the concept of desert could fit without alteration into any kind of virtue ethics, and MacIntyre's Aristotelian point is difficult to formulate. The problem with Rawls and Nozick, following virtually all Enlightenment-infested political philosophers, is the notion of a social contract: of autonomous individuals coming together to make some deal, and all obligations flowing out of that. We've had several episodes (most notably Hegel) arguing against this model of the self. MacIntyre's version of this is that we're born heaped with obligations, put there by our very nature as beings-with-families, as political animals. Our parents deserve our respect, for instance, insofar as they've done their parental duties, and our fellow citizens deserve quite a lot from us quite apart from any good deeds or services to us in particular that they might have individually have performed.

As Nietzsche understood, most of our everyday moral concepts like "desert" really do require some remaking given Enlightenment advances in science, and Matthews is correct that our political vocabulary is wanting philosophically, but that doesn't mean that a philosopher needs to deny all the intuitions behind everyday moral sentiments, any more than a rejection of theistic morality entails nihilism. Even Stevenson the emotivist thinks that our moral expressions are conveying something that can be fodder for argumentation. Matthews runs hard and soft determinism together, but the latter, also known as compatibilism, I take to be a much more common view among philosophers. So yes, we're determined on some physical level, but that's largely irrelevant to our everyday decision-making practices: we can still talk sensibly about the choices we make. Likewise, though desert need not be taken as a fundamental moral phenomenon, in the manner of sin settling on the soul, and so in these more enlightened times we lose the rationale for retributive punishment, we can still talk coherently about fairness and have today's debate: Is it more fair for a rich person to keep all of his money or to have to put some in the public pot, given that said public pot is a necessary condition (through police, roads, education, defense, the monetary system itself, banking security, etc.) of his having all that money?

Though it's silly to talk about philosophy in general yielding a verdict on this or any other decision, I do think that determinist considerations undermine the strong conception of individual desert. If desert, fairness, and rights are not a matter of God-given assignments, but of ongoing social deliberation (which is only reasonable given how recently in history this moral vocabulary came about; something God-given and basic should have been evident right from the start, right?), then the hard-line conservative doesn't have any philosophical ground (such as a reference to natural property rights a la Locke) to stand on here. Rather, the current debate is exactly part of the process of determining what we as a society want fairness to count as in this context, given our current situation. The resistance to this philosophical point is on par with the common cultural gut reaction against all forms of subtlety when it comes to ethics. Again, people feel like either there must be some hard rock standard (divine or otherwise), or it's all just arbitrary. Getting over this insistence on oversimplification will be a definite sign that our culture is becoming less immature.