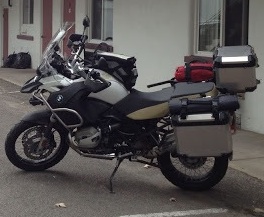 Two friends of mine have recently started blogs, though of different stripes.

One is by Gary Borjesson called Idle Speculations. Gary and I met on the faculty at St. John's, and, like me, is on leave right now. Gary's book on dogs, friendship, and philosophy, Willing Dogs & Reluctant Masters: On Friendship and Dogs

, has just been published. His blog, just a few entries long, swerves from ruminations on the coming death of his dog (Aktis has been ill), to an article on the National Sheepdog Finals, to reminding us that dogs have rudimentary, but essential, understandings of justice.

The other, Clearing My Head, is by Robert Henderson, a good friend from my grad school days at the University of Rochester where I studied experimental particle physics. Bob studied theoretical particle physics, but following his degree became a quant on Wall Street. After 15 years working at several banks, he's gone on a motorcycle trip to clear his head and make a transition in his life. He's riding across the US, taking the back roads from New York to the west coast, mainly improvising the path along the way. Clearing My Head, is primarily a travelogue, recording his trip and commenting a bit along the way. He's a big fan of Pirsig and istened to our episode on Zen and the Art of Motorcycle Maintenance as he rode from Madison to Cedar Rapids, Iowa. There's something fitting about listening to that episode while riding a motorcycle across the country.