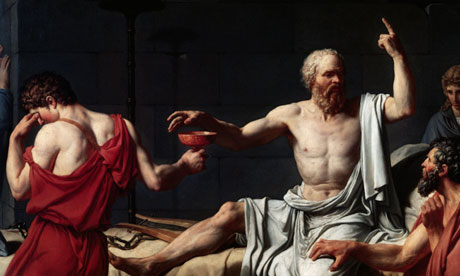 Freeman Dyson has a review of Jim Holt's Why Does the World Exist? in the early November issue of The New York Review of Books. Dyson is an esteemed physicist who, as a young man, cinched the link between accounts of quantum electrodynamics given separately by Richard Feynman, Julian Schwinger, and Sin-Itiro Tomonanga in the late 1940s. He probably should've been included in the Nobel Prize awarded for QED, but it is limited to three simultaneous recipients. Dyson's review is interesting for a few reasons. First, he attended Cambridge at the time of Wittgenstein and, in fact, lived in an apartment below him. He had been given the Tractatus as a gift in high school and "read it through in one night in an ecstasy of adolescent enthusiasm." His reminiscences about Wittgenstein in a few paragraphs is worth the read itself. Second, his judgment of the philosophy is linked to his judgement of the actions of the man. For instance, "Heiddegger himself lost his credibility" when he joined the Nazi party as a rector at Freiburg. Discussing Wittgenstein and Heidegger (the twin 20th century biggies according to Holt), Dyson quips:

Holt summarizes the difference between Heidegger and Wittgenstein in nine words: “Wittgenstein was brave and ascetic, Heidegger treacherous and vain.” These words apply equally to their characters as human beings and to their intellectual output.

In the end,  while his review presents some overview of Holt's book, it is really a lament of modern philosophy as being out of touch, overly and irredeemably academic, and, in the end, not really much about anything:

Newton and Locke were friends and colleagues in the English parliament of 1689, helping to establish constitutional government in England after the bloodless revolution of 1688. The bloody passions of the English Civil War were finally quieted by establishing a constitutional monarchy with limited powers. Constitutional monarchy was a system of government invented by philosophers. But in the twentieth century, science and history and philosophy had become separate cultures. We were three groups of specialists, living in separate communities and rarely speaking to each other.

When and why did philosophy lose its bite? How did it become a toothless relic of past glories? These are the ugly questions that Jim Holt’s book compels us to ask. Philosophers became insignificant when philosophy became a separate academic discipline, distinct from science and history and literature and religion. The great philosophers of the past covered all these disciplines. Until the nineteenth century, science was called natural philosophy and officially recognized as a branch of philosophy. The word “scientist” was invented by William Whewell, a nineteenth-century Cambridge philosopher who became master of Trinity College and put his name on the building where Wittgenstein and I were living in 1946. Whewell introduced the word in the year 1833. He was waging a deliberate campaign to establish science as a professional discipline distinct from philosophy.

Whewell’s campaign succeeded. As a result, science grew to a dominant position in public life, and philosophy shrank. Philosophy shrank even further when it became detached from religion and from literature. The great philosophers of the past wrote literary masterpieces such as the Book of Job and the Confessions of Saint Augustine. The latest masterpieces written by a philosopher were probably Friedrich Nietzsche’s Thus Spoke Zarathustra in 1885 and Beyond Good and Evil in 1886. Modern departments of philosophy have no place for the mystical.

This is a genuine lament on Dyson's part, I think, not merely a physicist scoffing at something that has never touched him, a blind man dismissing painting. It goes to Dyson's expectations for intellectual activity, a deep sense of the importance of the integrity in man, and his belief that an obligation of intellect is the betterment of the lot for others.

I had the fortune to spend some quality time over a few days with Dyson several years ago at St. John's. He'd agreed to give the sole paid invited lecture at the College, the Steiner Lecture, in which we would try to find "people of note" interested in bringing some of the outside world into our small campus. We didn't have much money, so we needed to rely on our ability to convince potential lecturers that they'd have an audience of broadly interested and voracious intellects who are really just interested in what they're thinking.  There is an abiding interest in science at the College, flavored with a deep interest in the philosophical implications of science. Dyson had made great contributions to physics early in his life and had spent the rest of it exercising a broadly interested scientific mind that had room for a variety of questions about human life and human good. He'd been invited in the 80s to give the Templeton Lectures on religion, though he's not a believer in any traditional or apologetic sense. He had a wild, creative mind coming up with the Dyson sphere and astrochickens.

The lecture itself was mediocre. He'd suggested several topics and we ended up choosing one that, on reflection, he didn't seem all that excited about -- the problem of quantum gravity. (Why he suggested it, I don't really know.) He spoke essentially off the cuff for the hour, though quite cogently, outlining his own sense that there would never be a properly quantum mechanical account of gravity. I remember it being interesting at the time, but not memorable.

What I remember most about interacting with him was his genuine politeness and interest in one thing after another. I took him to one of our labs to meet some students and, looking at a laser shining on a piece of paper, he wondered about the particularly dappled, iridescent quality of the light. The students had noticed this as well and they spoke for some time about it, what the possibilities were, and what they weren't. He took time with them and was interested to hear what they were learning and what they thought about it. Later, reading a long interview of him when he made his controversial arguments about global warming, it was clear to me that he didn't deny global warming as an effect, rather that it was an effect worth worrying about in the face of other human suffering in the world that ought to have our attention.

All this ties back to his lament of philosophy. In the end, Dyson is a futurist, a intellect concerned with possibilities, particularly possibilities for improving the lot of human life. (He's Cartesian in this way.) For him, philosophy ties back to mysticism because it's about articulating the unexplainable, wrestling with possibility. He's also a free spirit who's not very interested in class or academic divisions and those that promulgate them. There's a lot to admire about that.