November starts tomorrow, which means the Not School groups need to get all sorted out ASAP.

The proposed "What Is Philosophy?" group (reading a bit of Plato, Locke, and Bertrand Russell) is ideal for new-to-philosophy readers--or anyone who has been out of the game for a while and wants an easy and fun way to get back in. Right now, I see that the group record has been created, but only two people are signed up! Well, that's just sad and wrong, so I'm offering up to 10 people who sign up today their first month (i.e. $5) free.

Today only (OK, let's say into Thursday, because a lot of people get these blog posts via Wed. eve email), go ahead and sign up here for the recurring $5 donation, and where PayPal lets you make a note, put in the word "Halloween." After you get your account set up and join the "What Is Philosophy" group, I'll then refund your initial $5 payment. If you have any problem with registration, or can't use PayPal, then contact me.

I'll edit this post if/when we max out (I may end up letting in more than 10...) and this offer is concluded.

Note also that the group for the Federalist Papers is on the fence; it was created and (lightly) active in October, but it'll likely not continue into November unless injected with some new members. I am however, for sure leading one on The Conscious Mind: In Search of a Fundamental Theory

by David Chalmers (who will be on our show in December talking about his more recent but much less readable book), and Wes is leading one (including PEL guests Getty Lustila and Daniel Horne!) on Nagel's Mind and Cosmos. Other groups are on Quine, Harry Frankfurt, and Giles Deleuze. The new literature group is still deliberating but I think at this point either be reading Italo Calvino's Cosmicomics

. There's also a movie group (watch "Tree of Life" by Dec. 1) and there are a couple other proposals on the table (Sergio Gonzalez Rodriguez's The Femicide Machine

that could still become groups if you get in there and indicate that you'll join them. 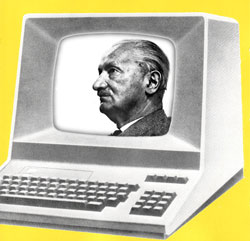 As an added incentive, Seth has posted his undergraduate thesis, "A Critique of the Quantificational Treatment of Modality in Predicate Logic," on the Free Member Stuff page. He thinks this document much too embarrassing to share with the public at large, so this is the only way to see the philosophical origins of your favorite Heideggerian.