I saw this Opinionator article from Christy Wampole in the New York Times: "How to Live Without Irony." It condemns the ironic lifestyle of Generation Y as terminally inauthentic, avoiding real commitments, making us (them) incapable of dealing with the world at hand and with each other.

Central to Wampole's critique is a standard "I don't understand the younger generation" vibe, which now looks at the 90s (which kicked off the age of irony) as "relatively irony free" with "a combative stance against authority." She admits that her recollection may be "over-nostalgic," and I'll grant her that all such generalizations about the spirit of generations are basically bullshitting, or, at best, some weird kind of pseudo-psychological account that can "make ya think" but isn't really putting forward a philosophical thesis. The guts of Wampole's story has to be an ideological critique, which is to say that if you are acting in such and such a way ("How much hyperbolic language do I use? Do I feign indifference? ...Do you attempt to look intentionally nerdy, awkward or ugly?"), then you're screwed up. (This is, for example, how we can charitably interpret Nietzsche's comments on any number of groups: not as a condemnation of a group of people, but as an argument against an ideology which he thinks is explicitly or implicitly professed by some group.)

I've argued before here (and here and here) that irony need not be negative in the way Wampole describes. She says that overcoming irony means cultivating "humility and self-effacement," yet also earlier describes an irony as involving "self-scrutiny" that results in a presentation of yourself that makes fun of yourself. Yes, as she says, irony is self-protective, in that you've preemptively criticized yourself before others can do so, but that's what humility amounts to: "I'm probably full of shit here, but here's what I think..."

As I've described it, ironic fashion and music choices need not be dismissive and inauthentic, but rather can express one's openness to experimentation. In the 90s, some people started wearing bell-bottoms and listening to disco again, in exactly the kind of ironic way that Wampole objects to, but this occurrence isn't accurately described as these people really hating this 60s/70s throwback things but wearing them anyway out of peer pressure, secretly despising themselves. No, it's that those fashions and music are actually fun, even if the commercial elements involved in their original historical occurrence are objectionable. Today's hipster (so I gather) doesn't wear goofy horn-rimmed glasses and wear a fedora because these things make him look ugly, but because he actually thinks they're fun, and slightly rebellious, and maybe marks him as "in the know" in a way that other people aren't. This can be annoying and smug, but doesn't display the nihilism that Wampole identifies.

It's worth discussing a paragraph from her article that stuck out to me:

Life in the Internet age has undoubtedly helped a certain ironic sensibility to flourish. An ethos can be disseminated quickly and widely through this medium. Our incapacity to deal with the things at hand is evident in our use of, and increasing reliance on, digital technology. Prioritizing what is remote over what is immediate, the virtual over the actual, we are absorbed in the public and private sphere by the little devices that take us elsewhere.

The first sentence reflects her view that irony is a social phenomenon, a matter of fashion; the latest hipster trend can be communicated rapidly. I disagree: viewing irony as a form of epoché means it is not purely and primarily social, but is a way of putting distance between oneself and ones value judgments, and Wampole affirms this in the rest of her critique. The rest of her paragraph expresses a common and I think well-grounded concern about technology and distraction, but I don't think it has much to do with irony. In fact, I've found that the Internet has made me less likely to use irony in communication, as it's far too easy to be misunderstood when writing to be all subtle.

I've suggested that irony as distance can be positive: being able to express ourselves without committing to a value judgment concerning that which we've expressed can then encourage more dispassionate contemplation. Ironic choices let you try out fashions and music that you might not otherwise to see whether you really do hate them and yourself afterward, or whether you've discovered something fun. Ironic gifts as Wampole describes can express that "it's the thought that counts, and I thought this would amuse you," which is better than, "here's a gift certificate; look how much cash value I've assigned to our relationship." (Though, of course, actually taking the time to pick out a sincere thing the person would like is best, but man, that's a lot of work!)

I think I'm not fully understanding Wampole's distinction, in that to me the "new sincerity" she mentions is just as hipster as the rest of it; the films of Wes Anderson are chock-full of irony to my eye. She mentions that people that have undergone tragedy lose irony, but to my ear, irony and gallows humor are very closely related, such that irony is perhaps the best way of dealing with tragedy. That this idea has permeated the culture is perhaps evident in that NBC now has a sitcom about ironic tragedy sufferers. So yes, inauthenticity and failure to deal with one's own feelings and the realities of life are bad, and yes, I'm sure there are individuals who use irony in the way that Wampole describes (though how she'd be in the position to make such a dismissive psychological diagnosis about the, I do not know), but no, the ship of irony is not tied to such matters: irony as the free play ideas without shame is in fact an antidote to some of the very maladies she identifies: maybe my 1950s hipster douche haircut expresses the real me. 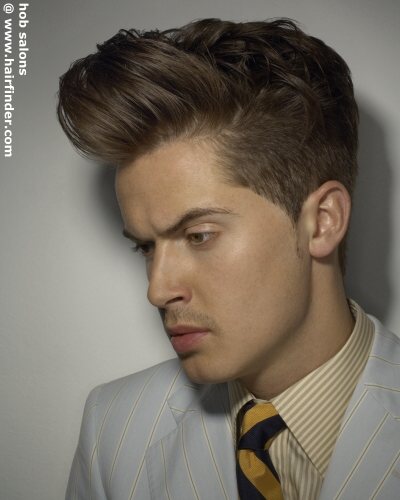 -Mark Linsenmayer (who is not shown in the above photo)