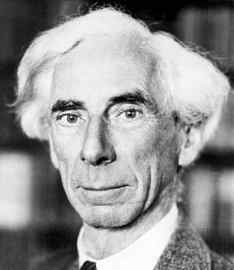 I've released a new recording: me reading Bertrand Russell's essay, "On Denoting". It's available free to members, or (since it's public domain), anyone can purchase it here.

A key point of transition between our Frege episode and our very-soon-to-be-released Quine episode is Russell's theory of definite descriptions. In "On Denoting" from 1905, which you can read here, Russell argues that it's not necessary to have entities like "senses" as Frege does.

For Frege, as you'll recall, a word can have both a meaning (its sense) and a denotation (its referent). So "Clark Kent" and "Superman" have the same referent, but different senses. But since actually, Superman is a fictional character, technically speaking, neither of those terms has a referent, so in that case, to avoid the term being meaningless, Frege says that the referent IS the sense.

This means that the sense, the linguistic meaning, has to be part of your ontology, your list of things that exist in the world. For a natural science-minded person like Quine, this is intolerable: meanings aren't the kind of things that science studies. So he embraced Russell's solution, which it to analyze a statement like "Superman wears a cape" as "There is some X such that X has super strength, wears an "S," is also known as "Clark Kent," etc., and that X wears a cape." This way, the sentence is still meaningful; it just happens to be false, because there is no X that fulfills this description.

The file is audio of the whole essay, and I kick it off with a short introduction. It's about 35 minutes long, and after downloading it from our site, you can add it to iTunes or wherever to listen in just the same way you listen to our podcasts.