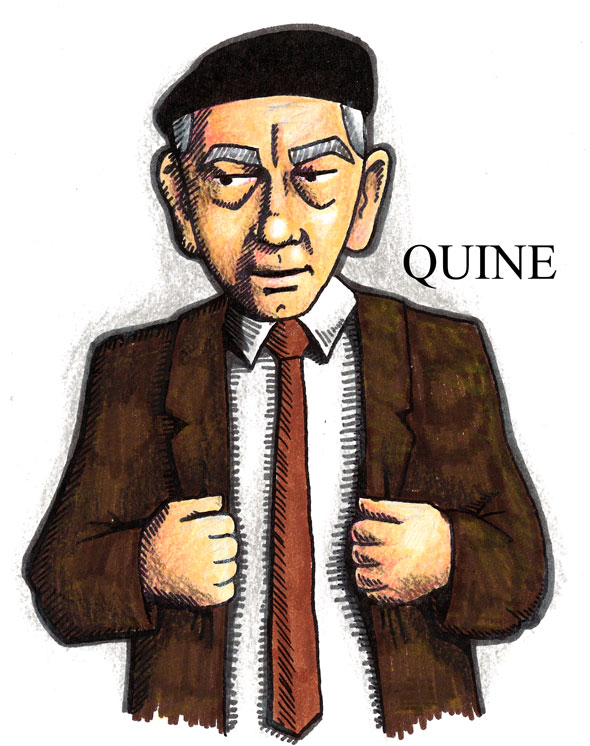 What kind of metaphysics is compatible with science? Quine sees science and philosophy as one and the same enterprise, and objects to ontologies that include types of entities that science can't, even in principle, study. In these two highly influential essays, he first tells how to determine what ontological commitments your philosophical theory is making, and he advocates for one that, for instance, doesn't allow talk of the "possible twin sister" that you could have had but didn't. In particular, Quine doesn't want an ontology to have linguistic meanings in it. Sure, sentences can be meaningful, but that doesn't mean that the sentence refers to or makes use of some entity, the meaning, that must exist (as Frege thought) outside of the head of any speaker.

In "Two Dogmas," he takes on a related point: the concept of synonymy, or "same meaning." We think that some sentences are true by definition ("Bachelors are unmarried") or true in virtue of logic alone ("x=x," "2+2=4"), while others ("my dog is on fire") require that we go out and look at the world to determine their truth. Quine challenges this distinction, arguing instead that our truths don't get individually verified by experience, but "face the court of experience as corporate body." So if I have an experience that seems to violate an established scientific law, I have leeway in which part of the "web of belief" can be adjusted to accommodate the new information. The statements we might have thought are analytically true (true by definition or logic) are really just those which most resist change. Quine drives us to this conclusion by allegedly showing that "true by definition" can't be explained without circularity: we always end up referring to some version of "same meaning," like synonymy or analyticity or a priori or necessarily true, and it's this set of terms that we're trying to give an account for.

Mark, Wes, Seth, and Dylan are joined by Matt Teichman of the Elucidations Podcast. Read more about the topic and get the texts.

Audio versions of the Quine essays, as well as another essay relevant to this topic, "On Denoting," by Bertrand Russell, are available free to PEL Citizens.