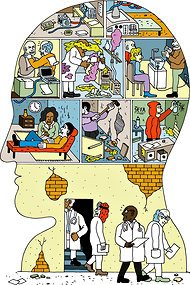 A friend of the podcast pointed me to today's column in the NYTimes Gray Matter by Alisa Quart about a backlash against neuroscience, particularly popular accounts of it throughout mainstream media from Malcom Gladwell on tipping points to Chris Mooney on the "republican brain" to Eben Alexander on the neuroscience of heaven. These all follow the general theme of over-simplification and over-extrapolation of, in this case, neuro-scientific studies. (Alexander would seem to be something of an exception here. He's using his cred as a scientist to give authority to his personal testimony regarding a near-death experience. He's not pointing to a double-blind study or anything. He's just saying "I saw heaven when I was in a coma and since I'm smart and I'm a neuro-scientist, you should believe me.")

It’s not hard to understand why neuroscience is so appealing. We all seek shortcuts to enlightenment. It’s reassuring to believe that brain images and machine analysis will reveal the fundamental truth about our minds and their contents. But as the neuro doubters make plain, we may be asking too much of neuroscience, expecting that its explanations will be definitive. Yet it’s hard to imagine that any functional magnetic resonance imaging or chemical map will ever explain “The Golden Bowl” or heaven. Or that brain imaging, no matter how sophisticated and precise, will ever tell us what women really want.

I haven't done and exhaustive search, but it seems to me that this sort of over-reaching isn't anything new to science, especially popularization of scientific research. Relativity and quantum mechanics had all sorts of such issues in the first half of the 20th century as people tried to fold new scientific understandings into our broader understanding of human experience (some might say they still do). In the 1800s, electricity was both a parlor trick and a connection to the beyond through unseen waves. This is the century of biology and the brain (if you read the media), so we have all these shortcuts and rather simple-minded speculations there now.