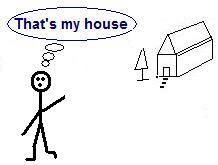 A feature of Carnap's system discussed in the episode was his his attempt to objectivize our talk of objects by removing any demonstrative or ostensive elements. Though the "elementary experiences" as I examine them are of course mine, and not analyzable in themselves according to Carnap's account, the only way they become useful to science is through their connection with other experiences, which enables quasi-analysis that picks out qualities which we can then talk about in common.

So even though what I call green and what you call green might not even be phenomenally the same thing (the inverted spectrum problem in epistemology and philosophy of mind), the fact that we call all the same things green makes this a functional concept. Ultimately (and we didn't get into this on the episode), at the end of the book, Carnap opines that an ideal base for his system wouldn't even be these elementary experiences and the recollected similarity relation, but just the relations/structural properties themselves, as in the train line example we discussed, where the whole definition of a node in the train network is its relation to other nodes.

to research that for a future (not yet scheduled) episode, and was surprised to see that Whitehead reverses this relation between demonstrative and structurual (descriptive) properties in pursuit of the same goal.

Whitehead states (p. 9): "...Thought places before itself bare objectives, entities as we call them, which the thinking clothes by expressing their mutual relations." What science does, according to Whitehead, is describe the "bare objective" of a demonstrative: that thing. In order to say anything about that thing, we have to use a common concept word, which is to compare it to other things, and thus bring in a lot of connotations that aren't actually relevant to that bare objectivity we want to talk about. So for Carnap, the ideal is to talk only about the structural properties, while for Whitehead, the ideal is to shore away all the structural, comparative, descriptive properties and talk about the unspeakable: the immediate object of experience.

Clearly, there's a lot of overlapping ground here, though, in that they both recognize the same relationship between bare demonstratives and the objects of our speech (and moreover, they both refer positively to Russell's theory of definite descriptions). However, they'd describe this relationship differently: For Carnap, the concept is built out comparison of the bare demonstratives (elementary experiences), and all talk is actually about sets of these elementary experiences, whereas for Whitehead (who I'm still working to figure out), talk by its nature is impure, losing the content of an individual experience in having to use a general concept term. For both of them, the immediate experience is the ultimate ground for objectivity insofar as that's possible, which is ironic because the immediate experience is of course the essence of the subjective; it's mine and mine only, incommunicable in some sense.