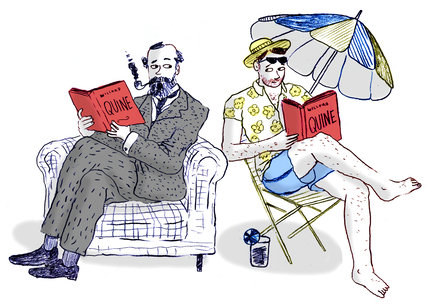 After our posts about philosophical literature it seemed appropriate to refer to this post from the NY Times on philosophy itself as literature by Jim Holt.

...Whether they are concerned with the nature of consciousness, of space-time or of the good life, analytic philosophers continue to lay heavy stress on logical rigor in their writings. The result, according to Martha Nussbaum (herself a sometime member of the tribe), is a prevailing style that is “correct, scientific, abstract, hygienically pallid” — a style meant to serve as “a kind of all-purpose solvent.” Timothy Williamson, the current occupant of the illustrious Wykeham Chair of Logic at Oxford, makes a virtue of the “long haul of technical reflection” that is analytic philosophy today. Does it bore you? Well, he says, too bad. “Serious philosophy is always likely to bore those with short attention-spans.”

But what is literature? ...“Lucidity, elegance, individuality”: these are the three essential traits that make a work of prose “memorable and unmistakable,” that make it literature.

Holt then argues the analytic philosophers like Quine do rate as literature ("Quine, whose classic article “On What There Is” can be read over and over again, like a poem.").

Whether or not philosophy counts as literature is dependent in part upon the answer to the question Holt raises: "What distinguishes literature from mere communication, or sheer trash?" In our recent Nietzsche episode, we contrasted the Nietzsche article itself, which was written with literary flair, with the secondary source on it by Maudemarie Clark, which, though very clear and helpful, struck us as written for informational, not literary purposes. From this standpoint, having an elegant, clear style is not sufficient to count as literature, and in fact more florid, obscure texts who mix their message in with some showmanship (Deleuze comes to mind here) would be more likely to fall into the category than more understandable ones.

Interestingly, there seems a distinction to be made between "having literary merit," i.e. being very well written ("like a poem," as Quine is, according to Holt) and "being literature." We typically think of only fiction as literary, or if (as in the case of early Tom Wolfe books, for instance) it's non-fiction, it needs to be written as a story, i.e. like most fiction. We could, though, expand the definition to include anything that's arguably worth reading, even if you already know the information involved: for instance, you don't read a technical manual if you already know how to work the thing it describes, but you might find it valuable to read a work of well-written philosophy or history even if you already know very well the subject that it's about. In that case, the category will include a lot of philosophy (perhaps all good philosophy). The formula presented of “lucidity, elegance, individuality” seems as good as any to sum this up. However, I'm guessing that this is too broad, as it would, I hope, place some of my blog posts and even my more thoughtful emails into the category of literature. Oooo! How fancy am I!

So, no, I'd rather not add the whole of philosophy, and certainly not analytic philosophy, to the canon of "literature," but I'm willing to admit that this is largely a verbal preference of no great import. I don't need such a label to make me feel better about what I'm spending my time reading.