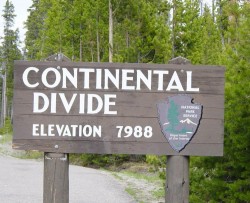 [Editor's Note: We're happy here to present a first blog post for us by Rian Mitch (submitted in response to our recent call for more bloggers). Rian was one of the voices on our Deleuze Not School discussion, whom we met when he took us to task via email for our slipshod treatment of Derrida on ep. 51. He consequently has been leading a Derrida Not School group.]

A recurrent topic on PEL has been the distinction between the analytic and continental schools of philosophy. In this NY Times Opinionator piece from last year, Gary Gutting, chair of the philosophy department at Notre Dame, gives an account of the history of this division. Gutting himself decides to play it almost neutral, allowing a historic reduction of the origins of both continental and analytic philosophy. This article does little good if you're trying to decide where you stand, but it does provide insight into the ridiculous shouting match between the two schools.

Though it seems contrived, this split between Americans/British (Analytics) and the rest of the world (Continental) is an ongoing issue in the professional world (and the fact that some deny that the distinction is legitimate at all is part of the debate itself). One could question whether Gutting's slant is correct, with his opinion of an analytic superiority obviously impacting his words; you'd likely want to check out a few more articles and authors for yourself before following his lead. Still, the article provides some value in sketching out the strengths and weaknesses of each of the schools. Gutting suggests a few areas where each of the schools could take a lesson or two by addressing the overlapping areas of interest in modern day philosophy. Overall, the article gives some nice groundwork to feel your way around this aspect of philosophical discourse today.