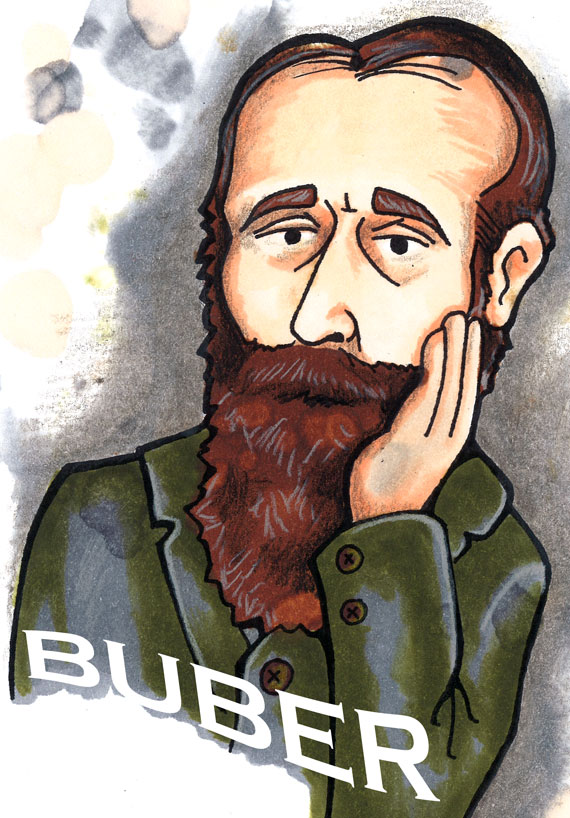 On Buber's 1923 book about the fundamental human position: As children, and historically (this is his version of social contract theory), we start fully absorbed in relation with another person (like, say, mom). Before that point, we have no self-consciousness, no "self" at all, really. It's only by having these consuming "encounters" that we gradually distinguish ourselves from other people, and can then engage in what we'd normally consider "experience," which Buber calls "the I-It relation," wherein we can reflect on and manipulate the world.

Buber thinks that unless we can keep connected to this "I-Thou" phenomenon, through real, mature relationships (dialogue!), and maybe also through art and the appreciation of nature (we spend a lot of time trying to figure out how, as he says, you can really have an I-Thou encounter with a tree), you're spiritually dead, treating everyone as objects and sporting a thin, pissy sense of self to boot. If you get get in the groove, on the other hand, you'll come off all shiny and ethical and ready to transform the world. Sweet! Oh, and by the way, the "Thou," every thou, ends up also being a direct line to God, so all you "spiritual but not religious" folks are theists after all. Nyah nyah!

Mark, Seth, and Wes are rejoined by verbose lawyer Daniel Horne to hash through this difficult and possibly mystical text. Read more about it and get the book.

End song: "Luscious You" by Mark Lint and the Fake from the album So Whaddaya Think? (2000). Download it free.