Here's my report on what I listened to in preparation for our episode. 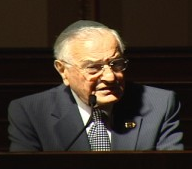 -Rabbi Joshua Haberman held a retreat in 2008, seemingly for a bunch of other Rabbis, but I'm not clear on this, and so gave four interactive lectures on Buber that provided a lot of the background I was drawing on. (Itunes link; scroll down to the oldest four episodes listed, currenctly items 89-92). In part 1, Haberman lectures on I and Thou, emphasizing the point that you shouldn't bother to get caught up trying to dissect his thorny language everywhere, but just keep plowing through, and you'll find some phrase here and there that will really speak to you. His students here are very interested in how Buber relates to the Jewish establishment (he's not crazy about it).

Parts 2 and 3 focus a bit more on his later life and other work; the stuff about Hadisism in part III is pretty interesting, and I wasn't able to at all do justice to it on the episode. Part 4 is mostly interaction with his students. Throughout the series, the students aren't on mic, so it's very difficult to get much out of those portions focusing on discussion, but Haberman himself is useful, if not actually concerned with those textual issues that might be more interesting to philosophers. He speaks very slowly, so fire up your portable devices to listen at 1.5X or 2X speed!

-The Philosopher's Zone (iTunes link) released a 5-part series on Jewish philosophy last September that concluded with an episode on Buber where Alan Saunders interviewed Buber scholar Paul Mendes-Flohr. This provides a good overview of his life and thought in only a bit over 20 minutes.

-Finally, I listened to a lecture from the University of Chicago also by Paul Mendes-Flohr (iTunes U link), also by Paul Mendes-Flohr, specifically on the personal relationship between Buber and Heidegger. As old men, they met up and had some conversations and tried to coordinate a conference that they would both be at, which didn't end up happening, but nonetheless it appears that Buber's lecture at a successive conference was a response to the Heidegger one at the previous conference (which Buber didn't make). Mendes-Flohr hypothesizes that Heidegger wanted more out of the relationship and invited Buber to come visit him at his country house, perhaps as a way of getting (public? private?) forgiveness for the whole Nazi thing in his past, but Buber didn't go for it, despite the fact that they apparently got along well in the time they did chat. Buber did not want to actually engage Heidegger in he kind of dialogue that would have had to confront that whole issue; he didn't want to have a real I-Thou experience with Heidegger.