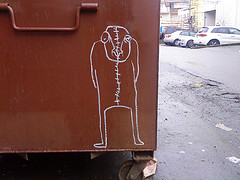 I ended our episode bemoaning that I feel like I still don't understand this talk of "subject" as opposed to "self." A few of you have made some good comments on this, but I'm still not satisfied. Let me pull a few things out of the Fink book:

1. In chapter 2 about "The Nature of Unconscious Thought," he concludes (on p. 22) by saying, "Now this way of conceptualizing the unconscious apparently leaves no room for a subject of any kind. There is a type of structure automatically and autonomously unfolding in/as the unconscious, and there as absolutely no need to postulate any kind of consciousness of this automatic movement." This is all in line with Sartre (at least) and with Lacan's view of the ego: while there is a self as object (the ego), as social creation that we have beliefs about (our "self-image") and which exists in a social space, that self is NOT the subject, not the one that does our actions.

2. Ch. 4 is called "The Lacanian Subject," and Fink distinguishes (on p. 35) Lacan from the structuralists and post-structuralists:

Structure seemed to excluce the very possibility of the existence of a subject... Lacan... maintains and defends both concepts--structure and subject--in a rigorous theoretical framework. Nevertheless, as he strips the subject of so many of the characteristics usually attributed to it in Western thought... it is not always easy to see what role is left to the subject...

3. He then, throughout ch. 4, tells us what the subject is not: it's not the Cartesian subject, it "is not the subject of the statement," it "appears nowhere in what is said." What it is is fleeting (p. 41): "this enunciating subject... only appears when a propitious occasion presents itself... [It] subsists only long enough to protest, to say 'No.' Once the subject has said his or her piece, what he or she has said usurps his or her place; the signifier replaces him or her; he or she vanishes... This subject has no other being than as a breach in discourse." However, immediately after that (p. 42), Fink clarifies that this description "applies.. more specifically to what one might call the 'Freudian subject' than to the Lacanian subject." You can see how this description of subject as breach sounds like the unconscious butting in, but per #1 above, the unconscious has no subject.

4. Still in ch. 4 (p. 43), Fink describes the Lacanian subject as the inverse of the Cartesian subject. By Cartesian subject he's referring to the "I think therefore I am" formulation, and taking this not as a deductive argument for a persistent subject (as Descartes did) but more in the way Hume and others took Descartes, which is to say that while thinking is going on, there is, at that moment, a subject, immanent in that experience. So the subject doesn't exist over time, but is just a "point of view" while consciously thinking at a given moment. But according to Lacan, "the subject... cannot take refuge in an idyllic moment where thought and being coincide but is, rather, forced to choose one of the other. He can 'have' either thought or being, but never both at the same time." Why? Well, because, again, per #3, Lacan is concerned with the unconscious: "Lacan thus seems to hold out for us some sort of prospect of a subject with true or real being that would be diametrically opposed to the false being of the ego, but this is not ultimately the case." So Lacan is like Freud (#3), but yet not like Freud (per #1), and yet there is a subject in some sense (per #2), though it's not a "substance" like Descartes's subject, and presumably we can't just say it's the body itself either that is the subject, that "does" our actions.

...The subject is nothing but this very split. ...A speaking being's two "parts" or avatars share no common ground... This momentous split is the product of the functioning of language... our alienation in language... While this split has nothing in common with the kind of agency we tend to associate with subjectivity, it is nevertheless already a first step beyond structure. Language as Other does not automatically make a subject of a homo sapiens child; it can misfire, as it does in psychosis... Though the subject is nothing here but a split between two forms of otherness--the ego as other and the unconscious as the Other's discourse--the split itself stands in excess of the Other... The advent of the split subject signals a corresponding division or breakdown of the Other.

6. "Beyond the Split Subject" (p. 46) elaborates the solution hinted at by the last couple sentences of #4. Lacan wants to retain allegiance to the Freudain quote sometimes translated as "where it was so I will be" (or "where the id was, so the ego will be"):

I must become the place where "it" was or reigned... I here apperas as the subjct that analysis aims to bring forth: an I that assumes responsibility for the unconscious, that arises there in the unconscious linking up of thoughts which seems to take place all by itself, without the intervention of anything like a subject.

This I, or subject of the unconscious, as we might call it, is in general excluded at the level of unconscious thought. It comes into being, so to speak, only momentarily... But while it is just as... short-lived a subject as was that of the interruptions known as slips of the tongue... this specifically Lacanian subject is not so much an interruption as... the acceptance of responsibility for that which interrupts, a taking it upon oneself.

For Lacan claims that "one is always responsible for one's position as subject."

Again using Sartre for comparison: Sartre too emphasizes responsibility. You're in bad faith if you don't take responsibility for even your implicit (Sartre doesn't like the word "unconscious;" the thinks that "unconscious thought" is self-contradictory) assessments of the world. We have ultimate control over our own attitudes, which include much of the way we interpret the world, whether we react positively or negatively to things that happen to us. Now, I have serious problems with this claim, but the point here is that Sartre can have such a view, and moreover believe in "subjectivity" in the sense that something like Descartes's starting point has to the starting point for philosophy, without having anywhere in his theory a "subject." Rather, again, there's just the public ego (an object, not a subject), and NO transcendental subject lurking behind all of our experience (a la Kant), and consciousness itself, which is just nothing: just the form of the world itself in the phenomenological field.

Both Sartre's and Lacan's terminologies here are non-intuitive and non-conventional. If you want to say (as they both do) that identification of the public self with the agent of our actions is a mistake, then you have to tweak the language to accommodate your position. Sartre does this by turning to phenomenology and finds that while of course my body and my thoughts and all that feel like mine, that doesn't mean that there was a "me" to have those things before the body and thoughts came along. Rather these phenomena, i.e. of the objects of our experience, are primary, and then "me" gets built off of that. I perceive, e.g. my emotions, and need to acknowledge those as me or be in bad faith. The self is built, but needs to be built coherently, and in consciousness of my freedom and responsibility in building it as it is.

Lacan likewise agrees that the self is built but for clinical reasons wants to separate the conscious ego, which is a product of the imagination (e.g. the mirror stage where we get an "image" of ourself) and the symbolic (languages as the Other's desire) that's a product of normal development but which involves a lot of self deception, from these identifications with the products of the unconscious which Lacan thinks are key in advancing therapeutically. While (per #1) there is no subject of the unconscious, I can take responsibility for the unconscious (well, bits of it) nonetheless: I can claim them, and call them "mine." For Lacan, this describes the subject's fleetingly coming into existence. The subject is essentially an action, not a substance, or more precisely, a phenomena encountered during an action. It's important that the analysand use this "me" terminology so that he or he feels ownership; that's just part of claiming responsibility.

To reiterate, I think this dispute is largely terminological: I don't think either way of using or not using the term "subject" can be ideal, i.e. accord with our pre-philosophical notions of "I," because these theories are meant to correct those pre-philosophical notions. Nonetheless, I find Lacan's formulation unnecessarily obscure, and think he could just use "self" as an umbrella term for all the self-identifications here, whatever else he wants to say about their role in psychological health.