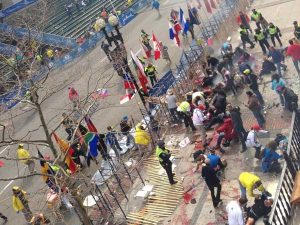 2. See events like the Boston Marathon bombing -- by virtue of their rarity -- as evidence of our relative security, not as one more reason to feel afraid.

3. Understand that our relative security is guaranteed on the whole not by guards and guns, but by basic human psychology, which involves the remarkable nonviolence of the majority of human beings in ordinary circumstances. The exceptions to this rule, far from being minimized by repressive or violent acts, will only be multiplied by them.

4. In the name of both liberty and security: Whatever the ideology of the perpetrators of a terrorist act – right wing or left, Islamist or otherwise – do not make one event an excuse to clumsily demonize a large swath of largely peaceable humanity: conservative or liberal, Muslim or other.