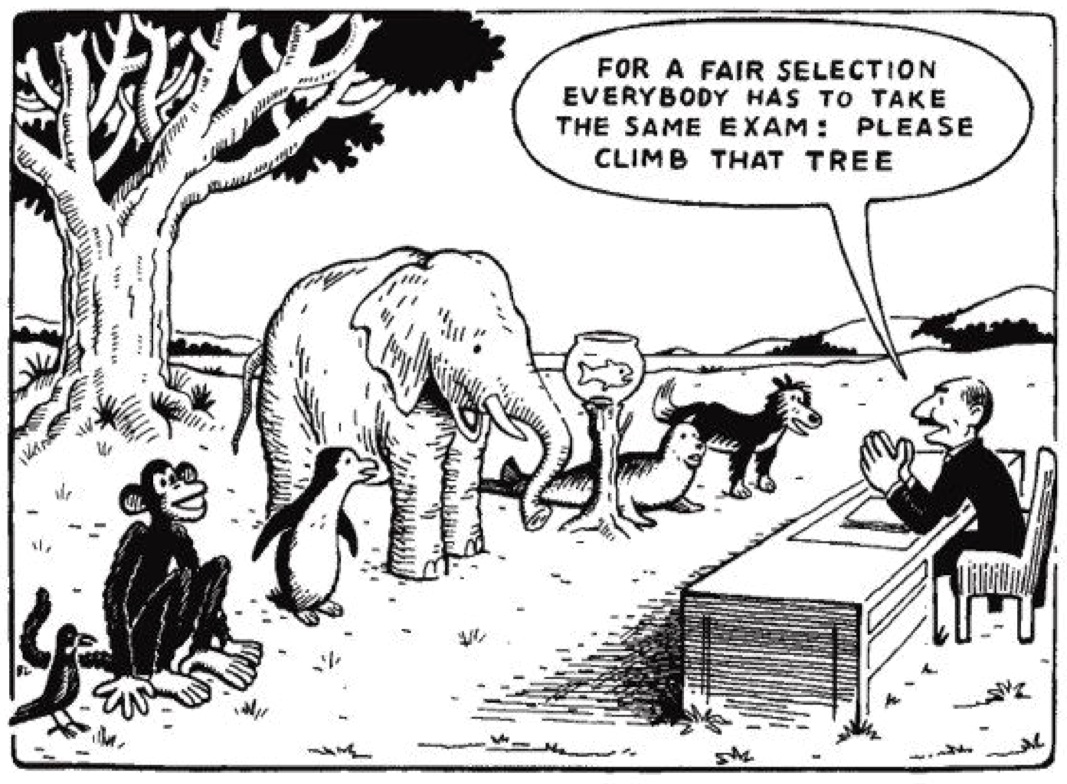 I've often thought of education – my chosen field – as applied epistemology. This was a conceit. Education does not explore or enact the subtle, rich, body of epistemological thought. Education has an epistemology, a vulgar blunt-object affair that is, essentially, the product of the limitations of the structures of traditional schooling.

Brushing up on your epistemology won't help. In its most abstract form (if you’re talking about “neutral monism,” for example) epistemology provides no comfort to the teacher trying to determine whether or not the kid in front of her “gets” the Second Law of Thermodynamics. Every teacher knows you can’t directly access the kid’s knowledge. We recognize that typical school tests are a proxy for such direct knowledge. We recognize that with our assessments we are constructing epistemological “if-then” statements. We are setting up a condition with an outcome that would only be possible if the student held such knowledge. If the student can answer questions about the French Revolution on a test, then, it is supposed, they know about the French Revolution.

But we've all crammed for a test, and then forgotten it all in the moments following. Or even prepared diligently for a test, passed it, then spent months away from the subject, and needed a complete review in order to get up to speed. In either case, can we be said to know the material? Possibly. The honest teacher will concede that, even assuming it's a good test, the test elicits knowledge of what the kid knew at the moment they were taking the test.

Call this a straw man. “No educator,” you say, “would argue that knowledge, once achieved, is permanent and immutable.” But the structures of traditional education do exactly that, and many educators accept these structures because … well … what’re ya’ gonna do? Credits are gathered marking the supposedly steady accumulation of knowledge over the course of years. This asserts an epistemological stability that is illusory. If you learn something in class, this structure says, then you can add it to your accumulation of knowledge. You own it forever. Traditionally, decisions about promotion, graduation, and dispersal of resources are made based on exactly this model.

More importantly, the traditional assessment suffers from the problem of the false negative. The proxy/test may be constructed as such: if the  kid answers this question, then that is evidence that the kid knows what I want them to know. But the inverse of that – if they don’t answer this question, then that is evidence that they don’t know – doesn't scan. Kids don’t answer questions correctly ... because they’re hungry. They’re pissed off. They’re indifferent to the material. They’re indifferent to you. They've fallen in love. They've fallen in love with you. They've fallen out of love. They’re sleepy. They’re wired. They’re about to be arrested for possession. Attendance is compulsory and the duty of every prisoner is to attempt escape! Etc. Etc. Etc.

There are many reasons a student might choose not to engage in a compelled behavior (in this case, answering a question on a test), and only one of those reasons is “ doesn't have the knowledge required.” To assert that such a wrong answer provides sufficient evidence of lack of knowledge is patently unethical. Yet educational structures urge us to do that all the time. Kid’s grades are averaged together, and the wrong answer is not only taken as evidence of momentary wrong knowledge, but that wrong answer contributes to the kid-algorithm as the measure of their knowledge. It becomes a grade, entered into their permanent record, the ultimate epistemological reifier!

Some assessments are better than others. Performance assessment – which was at one time cannily referred to as “authentic assessment” – asserts that, with skills, you can know if someone knows how to do something by watching them do it. And they’re right. If you want to know if a kid knows how to throw a ball, watching them throw a ball tells you that. But the problem of false negatives remains. Watching a kid not throw a ball, or throw a ball badly, doesn't tell you a thing about how well they are able to throw a ball. Assessment doesn't measure knowledge. It measures our ability to persuade students to behave in a way that can persuade us that they have demonstrated knowledge.

Does a careful study of epistemology provide a path towards assessing knowledge better, or more accurately? Or is it true that the only thing epistemology has to offer is solace in the form of epistemic humility. The Socratic mark of wisdom – I’m wise because I know I’m not wise – might prompt us to be more thoughtful and compassionate in the construction of our assessments – and in the construction of our relationships with kids. Many, many educators already evince this. Many are pushing to incorporate such humility in the structures of public education. This would be far more valuable than the illusion of certainty our structures currently pretend to.