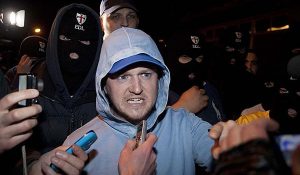 Andrew Sullivan has accused Glenn Greenwald of “justifying” terrorism for a post that is largely about the inconsistent use of the word “terrorism.” Greenwald’s response is a thorough and decisive debunking of Sullivan’s accusations, but I wanted add something as a follow-up to my discussion of Sullivan’s incoherence on these issues.  In this latest piece, he doubles down on the completely irrational notion that such incidents as the killing of a soldier in London are “terrorism in its most animal-like form, created and sustained entirely by religious fanaticism which would find any excuse to murder, destroy and oppress Muslims and non-Muslims in the name of God.” That’s my emphasis on the entirely by religious fanaticism clause, because I think it’s telling that Sullivan feels compelled to make such an unworkable generalization, despite hinting in the past that he is aware of the idea that any such act must the result of multiple causal factors working together.

On Sullivan’s account, the London killers were motivated not at all by the politicization of personal grievances I described in my previous post. Rather, we are to imagine that, in the absence of psychological problems or general hardships, they came into contact with “radical Islam” and were simply infected by it (despite having been raised, in the case of one killer, in a devoutly Christian family). We can give no account of why they would be attracted to such extremism except to say that it worked something like a virus. Presumably anyone – even Sullivan – could be corrupted by accidental exposure. It’s not that they were bitter people who were attracted to membership in a group that would allow them to identify as victims and give vent to self-righteous, vengeful rage. Rather, they read the wrong passage in the Koran, or simply listened to the wrong sermon that told them to do something “in the name of God.” “Ok,” they said, in the manner of Abraham asked to put the knife to Isaac. “Sounds pretty messed up, but if God said so who am I to object?” Sullivan might moderate his position here by acknowledging that “entirely by religious fanaticism” is too strong, but that religious extremism is an important causal factor here. But as I’ve tried to show, it is probably far less important than a potent combination of personal and political grievances. That’s because a psychologically plausible account of someone’s motives for killing usually involves their having a grievance of some sort, with a sense of humiliation or powerlessness often playing a critical role.

So Sullivan’s “entirely by religious fanaticism” idea is an incoherent one that I don’t need to rebut a second time. But I think it’s worth saying why such ideas are so attractive to Sullivan and others like him. Greenwald gives his own plausible account of such motivations (including their tribalism), but I think we can expand on this to say that there is a culture among opinion makers (and in some cases, regular journalists) of entitled sentimentality. When positively charged, this sentimentality usually involves promiscuously bestowing the title of “hero” upon human beings who have acted, in the face of difficult circumstances, like actual human beings; when negative, it means trafficking in moral outrage.

Many opinion makers will feel the need, in light of the latest act of terrorism or some other injustice, to make sure to advertise their opinions to the effect that such acts are outrageous, disgusting, and cowardly. It is hard not to detect in the vehemence of such protests at least a little anxiety about being thought – if they don’t testify loudly enough – to be on the wrong side of a very stark dividing line. In so testifying, they implicitly call upon others to testify as well: to yawp their loyalty to human decency or be damned either for their silence or want of volume. Such testimony also reflects an anxiety that their fellow human beings might not harbor such repulsion to terrible crimes – whether out of weak-mindedness or actual malevolence. As this anxiety increases, we are called upon to pledge our hatred not just for such acts, but for their perpetrators, and to partake in a communal desire for vengeance. But this moral commitment itself comes to seem too shallow and ephemeral to satisfy the inflamed moral imagination: we are asked at this point to treat the perpetrators as representatives of some group. Less cautious agitators will define this group quite broadly, as members of some race or religion. More sophisticated agitators will define their groups more carefully: it is criminals who are to be hated, or a certain subset of some religion – the “extremists.” Nevertheless, it is never enough to be repulsed by the act: we must also direct our hatred toward as certain portion of humanity.

This process of demanding loyalty to moments in an escalating cycle of idealization or outrage – to show gratitude to our “heroes” and denounce our anti-heroes – is a common form of social coercion whose power we are seldom aware of unless it is backed up with obvious legal sanctions, as in totalitarian regimes that punish thought crimes. But while most Americans would agree that punishing people for their thoughts and feelings is unjust, they commonly behave as if moral outrage were a proper form of social policing.

Moral outrage is actually a morally useless – and often morally compromising – state of mind. To illustrate the point, consider the mindset of the London killers or the Boston bombers themselves: from their mistaken point of view, their actions were morally justified. The horridness of the acts – blowing people’s legs off or hacking someone to death – is for the perpetrators just evidence of their allegiance to a higher good, a kind of moral sacrifice required in the name of justice (and contra Sullivan, not simply because God said so). To be motivated to do such horrible things, the perpetrators have to work themselves up into precisely the state of moral outrage that their acts function so well in turn to produce in others. (My account here is an extension of Plato’s “no one knowingly does evil” theorem).

When we respond with outrage to such outrage-fueled crimes, we do so in part as a kind of distancing mechanism, driven by the anxiety that abstention is implicit endorsement: to be psychically clean of any implication in the act, we must repudiate it in the strongest terms. Not to do so is to risk common cause with the perpetrators. But as we have seen, outrage achieves precisely the opposite of the distancing to which it aspires by replicating in our own minds the state of mind of the perpetrators. In this way, it is outrage (and not, as Sullivan seems to think, extreme religious precepts) that is properly described as viral; and it is a frame of mind that, while generally not sufficient for violence, sets the stage for it and makes it more likely to occur when other causal factors come to bear. While most of us are not in usual circumstances in danger of acting violently upon such outrage, we certainly would be if our psychological or physical security were compromised. Trafficking in moral outrage means trafficking in a potent kind of drug: some will use it recreationally, some will get addicted, and some will suffer an overdose. Someone who understood and cared about the very serious role that the propagation of moral outrage ultimately plays in causing violence – as opposed to that of religious beliefs – would not so carelessly contribute to it.

But how do we address the anxiety that we cannot enforce morality – in ourselves or others – without such outrage? If we don’t respond loudly and angrily to such a grisly murder on the streets of London, how will others – and we ourselves – keep in mind that such acts cannot be tolerated? And how do we motivate ourselves to fight against society’s frequent injustices, if not through outrage?

The alternative to outrage is sadness. Sadness is not as exciting as outrage, and it doesn’t confer the same protective feeling of toughness. It is not a “fuck you” to the would-be perpetrator of injustice, meant in a sense as a bit of black magic that will ward him off or preemptively intimidate him into submission. Nevertheless, it’s a more mature state of mind that leads to better consequences for a society while sufficiently honoring the moral issues involved. More constructive than outrage at the latest villain du jour or some perceived injustice is to acknowledge the sad state of humanity and get on with the task of trying to understand and improve it – tasks for which outrage is absolutely useless.

I am not suggesting that we can avoid outrage altogether, or that it ought to be simple pushed aside or repressed (nor am I arguing against the general importance of moral sentiments in favor of a Kantian grounding of morality in mere rationality). For most of us outrage is a natural, instinctive reaction to a perceived injustice.  But outrage ought to be sublimated rather than rationalized, and investigated rather than taken at face value. Beware of turning your outrage into laws, policies, maxims for action, theories, or public opinion pieces (the point of which ought to be actual reflection, not spleen-venting). In the world of opinion-making, outrage over some obvious injustice is an intellectually lazy way of achieving and conferring the kind of instantly gratifying agreement that often undermines itself. Author: “Murder is abhorrent!” Comments section: “You bet it is! And I’d love to get my hands on that f-ing murderer!” Subtext: killing people could actually be a lot of fun, and we understand murderers much better than we’d like to admit. Where there isn’t easy agreement over such pressing issues as what bad people terrorists are, we get a cycle of unending verbal abuse in which there is little attempt at actual discourse between opponents – retaliatory bouts of guerilla outrage (not as fun as killing people, but the next best thing).

We generally get better from Sullivan, who is often a champion of open mindedness and opponent of “epistemic closure.” More than any other public opinion maker I know of, Sullivan is willing to air opposing opinions in their strongest light without reacting defensively. He’s not afraid to admit to being wrong, or to publicly change his mind. But at his worst, he fits into a media culture that believes that there is something salutary (or at least profitable) in its expressions of moral outrage. There are few things that I think would improve public discourse more than for major opinion makers to treat these expressions as a bad habit that ought to be given up.