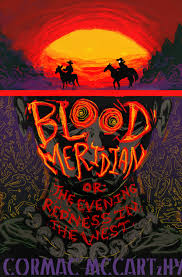 This June I met with Jordan Payne, Fiction-group regular, and Dylan Casey, of PEL-fame, to discuss Cormac McCarthy's novel Blood Meridian. We discussed the Judge, the kid, the landscape, the language, the title and touched on the same author's No Country for Old Men, The Road and The Crossing in just under two great hours.

We cover a lot of ground in our time together, though there is much more in the novel worth discussing--such as the opening quotes, the epilogue, and the fortune-teller scene- which I hope will be picked up in the comments!

If you would like to join our next conversation, add into the Fiction group in PEL's Not School. Our 6th reading will be announced shortly (looks like it might be Dostoevsky's Notes from Underground) which will lead into a live conversation at the end of July.