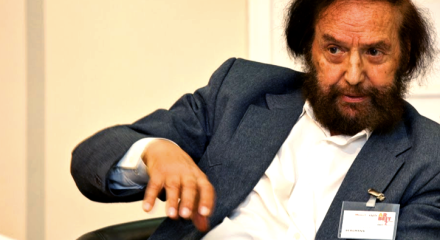 July is over, and with it another month of Not School. Join up for some August action, which looks to include some Kant, Jung, David Foster Wallace, Lyotard, the philosophy of computer programming, maybe some more Marx, and more if you get in there now and propose something you'd prefer!

My main activity this month was a group on the recent (well, 2003) work of a former prof of mine at U. of Michigan, Frithjof Bergmann, writing about alternatives to the job system. Read about the group here.

Last Sunday we recorded a full two-hour discussion on (the 50 page intro to) his (as yet unpublished in the U.S.) book New Work, New Culture. I was joined by Jason Durso, Khary Robertson, Leland Gregory, Andrew Miles, Michael Burgess, and Tammy Gottschling, making this I believe the largest group we've ever attempted in a free-form PEL-style format, though in this case most of us had our webcams on and also used the text chat feature to do a little policing to make sure everyone got to talk.

And boy did everyone have a lot to say. I think we all agreed that the problem Bergmann identifies is legitimate and urgent: that it's unrealistic to think that the world economy will produce anywhere near enough full-time jobs to employ even most people as technology continues to make more work unnecessary, and that our cultural tendency to rely so much on jobs as the sole means of resource distribution and really to define our lives is psychologically and socially damaging. Beyond that, there was some disagreement about the quality of Bergmann's analysis of the social barriers preventing us from even seriously imagining change, and of course there was a lot of confusion and doubt about the specifics of Bergmann's proposal, which involves ultimately a mix of traditional work (say, 10 hours a week), plus pursuing a "calling" (work you really want to do, with counseling centers to help you figure this out), plus high-tech self-providing (think of how we currently use the Internet to do things for ourselves that travel agents used to do, and then imagine comparable technologies deployed to enable cheap, localized production of food and other necessities).

I always keep in mind when reading Bergmann that, even though he was the "Marx" guy at the University of Michigan (i.e. he was one of two that taught Continental figures, Marx and neo-Marxists among them), he thinks that if you think you need a revolution to achieve your goals, then something has gone wrong with your thinking. Like Marx, though, he eschews purely theoretical philosophy (so his conception of New Work comes out of a Hegelian/Nietzschean analysis of human nature and freedom; we dwell on these things not to just figure ourselves out but to change the world), and he points to the influence of Marx's ideas (among many others, e.g. the ideals of democracy and equality, and the creeds of Protestantism/Catholicism) as demonstrating that philosophy matters, that the ideas people have about the world really can have fairly direct political effects. Consequently, his essay could be seen as primarily a piece of rhetoric to convince you that there is a problem and shake you up into acknowledging it to be a problem, which is just being able to conceive of a solution, as it is our common political tendency basically to never admit that insoluble problems are something we should even be spending time on (i.e. that they exist as problems): change what you can and live with what you can't and all that.

I don't think that Bergmann's prescriptions involve overthrowing capitalism, and in fact it's capitalism that allows things to actually get done, whereas in totalitarian states you just get can't the resources you need from point A to point B and otherwise organize efforts to produce things effectively. What needs to change is the job system, and capitalism will in fact run more efficiently and warp the rest of the society less if we in effect deprive it of its power by not making all of our livelihoods so utterly dependent on it. Capitalists should go ahead and institute whatever technologies will enable them to produce most efficiently regardless of what this does to jobs, and local (and national!) governments should not grovel on their knees with tax breaks to businesses just to get them to please give us all a few more jobs (and here rather than there).

If you decommodify necessities (like health care, and like we've essentially already done to electricity, water, the postal service, emergency services, much of the transportation system, and primary education), then there's still plenty left to motivate/profit private industry, and much of the rest of Bergmann's suggested improvements are not actions taken by governments but strategies to be adopted within communities and within industries that are intended to have their own appeal, to be obviously superior to the alternatives. In our discussion, the comparison was made to New Work being like the iPhone that comes out and achieves widespread adoption and imitation just because it's obviously better than the insecurity, lack of freedom, and and spirit-crippling character of a what passes for a full-time job these days, particularly in less affluent nations, but here as well, where even those in successful, stable careers are often crippled by their daily activities. Work should be designed to serve people, not people to serve work.

It's the latter sentiment that Bergmann seeks to press home in what we read, and even some of the details I've provided above about decommodification are missing from the text, the body of which (i.e. the part that we didn't read and that I've not been able to get ahold of in English) seems to be a report on all the various activities that the New Work organization and its many centers and projects. Even that presentation is given as an invitation for readers to join in this overall effort of strategizing and trying out different ways to react intelligently to the fact that jobs are just plain running out, and there's no way to undo the mechanization that removed the need for so many manufacturing and farming jobs or to undo the information revolution that more recently has removed the need for so many service and office jobs. Instead of trying to shove the genie back in the bottle or slow the inevitable, we have to actively embrace and plan for a future with few to no full-time jobs, instead of pretending that the present system is a product of nature itself and so just can't be changed. If we do that, we're all screwed.

Become a PEL Citizen to listen to the full discussion.

Read the text online for free.