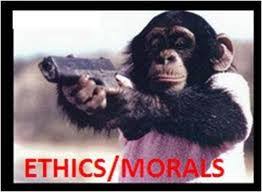 “Morality is neither rational nor absolute nor natural." (Nietzsche)

Nietzsche and Spinoza both challenged the validity of morality based on transcendent or universal values. They both argued that moral restrictions are based on weakness:  Nietzsche via enslavement by harboring vengeance or "resentment" against life ( Genealogy of Morals), Spinoza via enslavement to passive affections.

In both, the transcendent moral division between Good and Evil is replaced with an immanent, ethical differentiation (the noble versus base modes of existence for Nietzsche and the active versus passive affections in Spinoza). What determines a good ethic, then, is not the appeal to transcendent or universal values, but the manner in which one is capable of increasing in capacity, creativity and power.

Ethical Power as a function of Desire:

Deleuze responds to both Nietzsche and Spinoza by positing that an appeal to transcendence in morality is what prevents positive ethical behavior and thus "perverts" desire such that we can repress our own desire and separate ourselves from our own capacities and powers. Not by conscious will, not by conscious decision making, not by preconscious Marxian interests, but only by reference to unconscious drives (desires) can we understand ethics.

Nietzsche's concept of the will to power was first developed from his concept of drives: "Every drive is a kind of lust to rule, each one has its perspective that it would like to compel all the other drives to accept as a norm" (WP, 481). It is through our drives that we interpret the world, and are thus perspectival, not through our consciousness or perceptions.

What we call thinking, willing and feeling are "merely  relation[s] of these drives to each other." (BG&E 237) When we speak of "I" (ego) we are merely speaking of the current predominant drive, beneath which are more distant drives, not me, but it (the Id). To will is to use the predominant drive to command, while the other drives obey (largely unconsciously).

More significant than that we can never get beyond our representations of the world (from the phenomenal to the noumenal), as with Kant, is that we can never get beyond the reality of the drives, as with Nietzsche. Perhaps the greatest fiction is that we are subjects endowed with free will–"the fiction of a force separated from what it can do" (Deleuze).

We assume that behind every deed there is a conscious doer (Nietzsche) when in fact we are at the mercy of our unconscious drives. When we do not express our impulses outwardly, we turn them inward and generate "bad conscience," and false guilt (a function of the Freudian superego)—the reification of transcendent moral values above and beyond the value of life itself.

Good ethics thus enable an entity's power to actualize (not rationalize) its creative potential as a physical body with affects (which yield the ability to influence actively or be influenced), whether organic or inorganic. There is no appeal to the transcendental, universal "God" or "Subject."  Morality (top down, transcendent, universalizing) thus becomes truly unrealistic, inauthentic, destructive and fundamentally anti-ethical (ethics being bottom up, immanent, singular).

For further reading on the above subject see http://www.parrhesiajournal.org/parrhesia02/parrhesia02_smith.pdf

P.S:  Hillary Szydiowski is leading us on another Nietzsche adventure at the Not School Introductory Readings in Philosophy group, which will be tackling Beyond Good and Evil for December: http://partiallyexaminedlife.com/2013/12/03/neitzsche-does-an-encore/