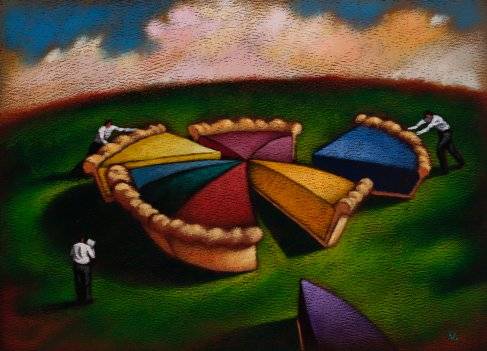 Rawls's principle 2a, to remind you, is (quoting from wikipedia here):

(a) they are to be of the greatest benefit to the least-advantaged members of society, consistent with the just savings principle (the difference principle).

This has appeal to modern liberals because it acknowledges two conflicting moral intuitions. On the one hand, fairness = equality, right? On the other hand, enforced equality is horribly soul crushing (as amply illustrated by this short story we occasionally refer to, "Harrison Bergeron" by Kurt Vonnegut).

So the talented and hard working can fly free, but not so fast, Randians and your ilk: you didn't build that, i.e. great human beings can't thrive in a barren wasteland, but require social institutions so that they don't have to spend all their time grubbing around for basics like food and shelter. The fact that you pay money for such food and shelter isn't enough to absolve you from your debt to society: no, you have to face up to the reality that we're all in this together, you and even the people that don't share your values and/or that you personally despise, so any rise in affluence on your part comes with it an obligation to help out those the least well off.

So Rawls thinks he's cut the gordian knot regarding these fundamentally differing types of intuitions. What does he think he's doing here? As discussed on the podcast, he's both a foundationalist of a sort, in that this original position is supposed to free us up to get at the essence of fairness which we can then apply to the creation of political institutions, and he's a modern anti-foundationalist who instead uses the method of reflective equilibrium: start with the beliefs and intuitions that we already have and try to make them consistent. If you can do that and come up with a foundational principle, as Rawls thinks that he has in this case, then the outcome is the same as if he were a foundationalist through and through and just took this version of fairness as his bedrock in the way that utilitarianism takes the principle of utility.

I want to contrast that with my own historically minded moral skepticism stolen mostly from Nietzsche. I often give the example here of abortion: I think we have two intuitions in us given our evolutionary and cultural history: on the one hand, we morally acknowledge beings as having moral worth only insofar as they resemble us, in particular as intelligent beings who can socially interact with us. So if aliens come down and they can talk to us and look us in the eye, they'll have rights even if they look like lobsters. Within the development of this intuition we can see some development: you might think that someone having a different skin color or language makes them different enough to disqualify them, but given proper exposure to such people and thought about what the essence of this intuition is, it's clear that it's the mental that's important here. On this logic, conversely, if someone looks like a person but is brain dead, or hasn't developed a brain, or is a fetus, then it isn't a person but an it.

However, we have this other instinctive intuition that makes us gush at anything that looks like a baby, whatever species. So fetuses sure do look like babies.

I take what I call foundationalism to be a type of moral realism: there really is a matter of fact about what justice is and whether a fetus counts as a person for moral purposes. Of course, the term "foundationalism" refers to an epistemic pattern of justification, not to an ontology, but these usually go together in a philosopher's full picture: we somehow get access to the big foundational ontological fact (maybe it's right in front of us, or we have to perform some mental machination to see it for what it is, or maybe we can only grasp it through faith), and that sets the stage for the rest. Moral dilemmas like abortion get solved dogmatically by referring to some notion of personhood like "a person is anything with a soul" or "a person is anything with the faculty of reason."

A believer in reflective equilibrium may well still be a moral realist, believing that there is some fact of the matter about a fetus's moral personhood, but might also think that the best we can do to determine the truth of the matter is to work with all the data we have and make a compromise among our current intuitions. While this type of ethicist is no longer a dogmatist, there's still the regulating principle (which is a nice way of saying dogma) that there is a right answer.

As a moral skeptic, I'm more willing to say that we just have these competing intuitions, and that's the end of the story. We may have to pick some principle to go with for legislative purposes, and there will be plenty of non-arbitrary reasons for doing so, but the fundamental moral situation is tragic (as discussed in the MacIntyre episode; he attributes this idea to Sophocles): I think intuition, reflectively considered, simply gives us incompatible directives, and so no consistent, complete, non-arbitrary, intuitive, and totally rational system of morality is possible. Since one has to choose to act in some way or other regardless, and you we have this set of moral intuitions and reflective considerations, I think reflective equilibrium is definitely the ticket to figure out how to actually live, but I think this should definitely not be mistaken for the act of discovering moral principles that are already written into nature.

Returning to the notion of justice, Rawls thinks that that instead of a cobbled together hash of conflicting intuitions, his principles constitute what anyone in the appropriate epistemic position would agree to, and so can serve as a foundation. But I think his compromise doesn't do justice to either intuition. On the one hand, it would allow really really large gaps between rich and poor so long as doing this results in the poor being better off than they would be otherwise. The fairness-as-equality intuition shouldn't be satisfied by this. OK, due to the Harrison Bergeron factor, there should be common-sense limits on how equality is imposed, but that doesn't make it less unfair that some people are much more talented than others. While Rawls's principles doesn't allow such talented the whole pie, it still allows them much more of it so long as the pie gets bigger (and so do the sizes of crumbs going to the less fortunate) by doing so. Likewise, for familiar reasons, Rawls's principle doesn't satisfy the libertarian sense of fairness: I worked for it (and/or it was based on my natural gifts), therefore it's mine.

I buy the principle myself; I think it's a reasonable compromise between disparate parties who have to live together, and I think my "you didn't build that" argument is pretty good. But I don't pretend that this is a dictate of pure reason, pure rational deliberation by those putting their personal interests aside (that putting aside being essentially the definition of rationality in the sense of impartiality). As a rule of thumb (which is all the moral skeptic really gets), the principle seems to constitute a pretty good guide for considering social policies, but I'd want to look at the particular policy in question, and it may be that in some particular case, one or the other intuition would win out over the compromise/rule.

The problem is not that since no rules are binding, you get arbitrariness, nihilism, and irreducible subjectivity. The problem is that the competing carefully considered intuitions, and thus the competing moral directives, don't dissolve into a glorious and permanent synthesis just because you come up with a decent sounding compromise. Rather, they have to be renegotiated when considering new challenges, and in the case of legislation, in a public forum where each of these intuitions gets its staunch defenders whose wills have to be mediated by government. To put it in Nietzschean terms, the problem is too many incompatible virtues, and this is less a "problem" to be solved than simply the human condition, whether we're considered as individuals or as a polity.