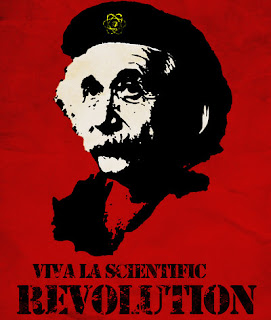 "Man tries to make for himself in the fashion that suits him best a simplified and intelligible picture of the world. Â . . . The supreme task is to arrive at those universal elementary laws from which the cosmos can be built up by pure deduction. There is no logical path to these laws; only intuition, resting on sympathetic understanding of experience, can reach them." -- Albert Einstein, 1918

If I had to pick to most dominant theme in the discussion of Kuhn's famous book, it would be the specter of relativism. The most controversial aspect of Kuhn's work is the claim that the world itself changes with each paradigm shift, Dylan says in the precognition of episode 86. There has been much negative reaction, Seth says, to Kuhn's picture of science as a human endeavor, as opposed to science as the quest for "Truth" with a capital "T". Yes, Mark agrees, Kuhn is rejecting the myth of the given. And presumably because of this strong note of anti-realism, Wes says that Kuhn's conclusions are "too strong" and he has been "over-interpreted" too. If Kuhn's picture asks us to give up on the notion that scientific inquiry is progressing toward the one and only Objective Truth, then what kind of truth is science 'progressing' toward?

As a precocious and idealistic 15 year old college freshman, Robert Pirsig became obsessed with questions about scientific truth and the problem of relativism. Â He was studying biochemistry when he noticed how fun and easy it was to generate new hypotheses. Rather than focus on his homework assignments, "he became interested in hypotheses as entities in themselves." At first he was amused by the seemingly endless proliferation of hypotheses and he coined a little law: â€œThe number of rational hypotheses that can explain any given phenomenon is infinite.â€ Â (ZAMM, 115.) After a few months, however, he started to understand the implications of this "law" and his amusement turned to horror.

"If true, that law is not a minor flaw in scientific reasoning. The law is completely nihilistic. It is a catastrophic logical disproof of the general validity of all scientific method!"

The method can't be conclusive, he figures, because there will never be enough time to test an infinite number of hypotheses. As an idealistic teenager, he had believed that the whole point of the scientific method was to find the one, true hypothesis. His intellectual hero had an answer to this problem but it was "incredibly weak," the young Pirsig thought.Â "Evolution has shown that at any given moment out of all conceivable constructions," Einstein had said, "a single one has always proved itself absolutely superior to the rest." Sympathy and intuition were strange words to use in relation to the origins of scientific knowledge, the young Pirsig thought, and "the phrase 'at any given moment' really shook [him]. Did Einstein really mean to state that truth was a function of time?" At this point heÂ became interested in scientific truth itself as "a temporal quantitative entity that could be studied like anything else". He saw that "some scientific truths seemed to last for centuries, others for less than a year." Even further, the lifespan of such truths seemed to be in direct proportion to the amount of scientific inquiry surrounding them - quite simply because "the more you look, the more you see."

"The purpose of the scientific method is to select a single truth from among many hypothetical truths. That, more than anything else, is what science is all about. But historically science has done exactly the opposite. Through multiplication upon multiplication of facts, information, theories and hypotheses, it is science itself that is leading mankind from single absolute truths to multiple, indeterminate, relative ones."

These are philosophical issues that cannot be answered within normal science, and they had no bearing on his biochemistry homework either. So, despite his 170 I.Q., he flunked out of college, waited until he was old enough, and joined the Army. Upon his return from Korea, as you might expect, he re-enrolled as a philosophy major. Young Pirsig "discovered that the science [he'd] once thought of as the whole world of knowledge is only a brand of philosophy" and he "found in philosophy a natural continuation of the question that brought [him] to science in the first place."

Huge portions of Pirsig's books deal with the nature of scientific truth and with epistemology in general. Despite his crushing disillusionment with respect to the foundations of scientific knowledge and his strong objections to relativism, I think Pirsig's conclusions go even further than Kuhn's. As Wes put it, Kuhn sounds very Kantian in his 1970 Post Script, except that he is a Kantian with "evolutionary categories" - Kuhn describes himself as a Kantian with "movable categories." Â Kant famously denied that we can have access to reality itself, access to whatever Â lies behind appearances, and claimed that the world can only be known through the basic conceptual categories that shape human understanding, which are the basis for any possible cognition of phenomena. For Kant, Â these categories of thought were considered to be inherent and universal structures of the mind, whereas neo-Kantians like Kuhn, Pirsig and many others take these categories as evolving constructs rather than permanent features of cognition.

A scientific paradigm, as Kuhn puts it, is "the conceptual network through which scientists view the world," but for Pirsig the entire world as we understand it is a giant heap of analogies or metaphors or models - all the way down, as they say. Like William James before him, who said that we carve out everything and that the human serpent coils over everything, Pirsig makes a similar case.

"In our highly complex organic state we advanced organisms respond to our environment with an invention of many marvelous analogues. We invent earth and heavens, trees, stones and oceans, gods, music, arts, language, philosophy, engineering, civilization and science. We call these analogues reality. And they are reality. We mesmerize our children in the name of truth into knowing that they are reality. We throw anyone who does not accept these analogues into an insane asylum."

All the categories of thought are such inventions, Pirsig says. Through a building process that puts one analogy on top of another, we "create the world in which we live. All of it. Every last bit of it". This conclusion is so far reaching that Pirsig says he "felt momentary fright and was about to strike out the words 'All of it. Every last bit of it.' Madness there," he confesses." But he couldn't see any logical reason to strike these words out and it was too late now for faintheartedness."

The discussion of "evolutionary categories" prompted Dylan to describe "an experiment with special glasses that made users see everything upside down and backward," as Pirsig describes it. "Soon their minds adjusted and they began to see the world 'normally' again. After a few weeks, when the glasses were removed, the subjects again saw everything upside down and had to relearn the vision they had taken for granted before." These experimental results are supposed to illustrate the plasticity of our interpretive categories, to show that we can adjust even when everything in the world is inverted. This idea doesn't just apply to reality goggles, optical illusions or other visual tricks; it also applies to the way we take reality as a whole, to our whole conceptual web. "The culture in which we live hands us a set of intellectual glasses to interpret experience with," Pirsig says, but "we get so used to certain patterns of interpretation we forget the patterns are there." In other words, the naive realist or the pre-philosophical realist is a person who's never noticed that he's wearing reality goggles, does not realize the extent to which "reality" is an interpretation and an invention.

How does Pirsig hold such a view without allowing it to degenerate into a nihilistic relativism? That's a very long story but basically he relies on a radical empiricism and a compatible pragmatic theory of truth. On this view, experience as such provides a measure of realism, an empirical constraint upon our claims, and truth (without a capital "T") is plural and provisional. In the same way that oneÂ "geometry cannot be more true than another; it can only be more convenient," Newtonian physics and Einstein's physics are both useful, although they have different advantages. "One can then examine intellectual realities the same way he examines paintings in an art gallery, not with an effort to find out which one is the 'real' painting," Pirsig says, "but simply to enjoy and keep those that are of value."

In a paper called "Subjects, Objects, Data, and Values," Pirsig discusses a famous conference of Physicists in 1927. "It was at one of those meetings that Einstein asked his famous question, 'Do you really believe God resorts to dice playing?'"Â Bohr, Heisenberg, and Schrodinger were also there to speak on the epistemological problems in quantum theory, among other things. Pirsig's paper was delivered in 1995 at an interdisciplinary conference on the nature of art and science and was later published along with the other papers as The White Book of "Einstein Meets Magritte."Â Â This paper tells a very long story too but, in a nutshell, Pirsig describesÂ Werner Heisenberg and Niels Bohr as "two artists in the throes of creative discovery. They were at the cutting edge of knowledge," he says. They had different interpretations of the theory and even different interpretations of reality and yet they were both supremely competent "artists" and there is plenty of room for both in the gallery of truth. As with all our intellectual descriptions of reality, to say one is true and one is false is "like saying that rectangular coordinates are true and polar coordinates are false. A map with the North Pole at the center is confusing at first, but it's every bit as correct as a Mercator map. In the Arctic it's the only map to have."