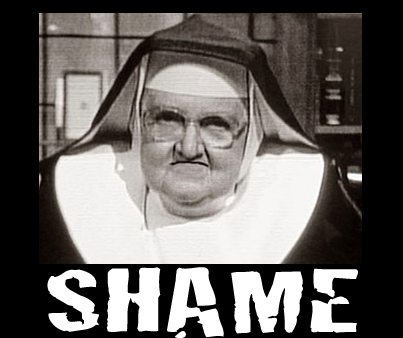 Both Sartre and Anscombe say that they're teasing out the logical consequences of atheism for ethics, and of course we saw this back in Nietzsche too. If you ask "are these figures moral realists or moral irrealists?", I think they're going to say you're missing the point. No, a sentence like "X is right" no longer becomes simply true or false, and this is because of some sort of conceptual mistake contained in the term "right" as it is usually uttered in moral circumstances, so that sure sounds like moral irrealism, e.g. emotivism, which says that such a declaration merely means "I approve" or a cultural relativist who would grant a truth value to the claim only when it is uttered in a particular cultural context and heard/judged by members of that same culture.

However, for both Sartre and Anscombe, a sentence like "X is cowardly" really does have a truth value, and "cowardly" is not taken by these figures as a merely descriptive term, but as a negative judgment. For Sartre, the term cowardly has a special place in his critical toolbox because of its association with bad faith: cowards don't just run from danger, but run from themselves. However, I think it also shares a status with gluttonous, intemperate, rash, boorish, and a hundred other evaluative yet descriptive words that he has no qualms about using. What's more, since he's such a believer in freedom, if you're a glutton, it's not because you have a physiological condition that makes your appetite inappropriately vast, but because you have chosen, again and again, to eat too much, to live in that gluttonous way, and if he calls you a glutton, it's not a compliment. What makes gluttony bad? Well, isn't it obvious? I suppose if you admit that your gluttony really is a choice, and what of it? We only live once, and I want to eat, eat, eat, and screw you if you don't like it... well, Sartre might be OK with that on bad faith grounds (though probably not; he seems to be able to use that accusation against anyone), but he'd still wince and screw up his face at you and look away in disgust.

Anscombe likewise will admit that cowardice is cowardice and gluttony is gluttony, and she (if the appropriate social reason for doing so arose) would not look fondly on you for having one of these characteristics. She might call you weak or foolish or simply defective; without having Sartre's confidence that it's your fault entirely, these terms aren't necessarily imputing a choice to you and condemning the choice. They are instead looking at what a human body needs, what a situation (such as being faced with an adversary threatening your family) requires, and categorizing some responses as inadequate. Anscombe needn't care, in categorizing you as defective, if it's your fault or not, except insofar as she might want to dissuade you, or be mad at you, or award you a medal or not. These kinds of judgments are situational; they are contemplations of action on her part, and not simply labels to put you in a box. Still, I have no doubt that if you are habitually defective in many ways, she certainly wouldn't have any qualms about having and expressing contempt for you, in a way that sure would feel like a moral judgment.

So what we have here is a shift in meta-ethics, in ideas about what a moral judgment is, which can just as easily be rephrased as a rejection of the term "moral judgment" in favor of some other kinds of judgments. So how can we characterize these other kinds, i.e. how does the meta-ethical shift play out in ethical behavior and judgment?

Well, for one thing, you don't start with universal moral rules and try to decide all cases of what you should do and how you should judge things based on those. There's no "do whatever will bring the most happiness to the most people" or anything like that. However, Anscombe certainly, and I think Sartre too, could have a strict policy of not killing the innocent, for instance. What justifies this policy (which I might as well call a rule)? Well (as with cowardice and gluttony), it's obvious! If you push them (sure, go ahead), they will give probably different answers, but with the same general drift: killing the innocent is unjust. Why should you not do unjust things? If you really have to ask that question, there's something wrong with you.

To dive a little into the differences here: Anscombe would say, OK, if you really wanted to prove that being unjust is bad for a the unjust person, you have to do some scientific psychology (like Sam Harris!), and before that, some philosophical work on the terms and structures involved (not like Sam Harris!) of a type that those under the spell of the obligation model of morality (i.e. all modern moral philosophy as of the 50s when she was writing, by her lights) have neglected.

Sartre, like any existentialist, has only the resource of asking you to look deep within yourself and figure out what you really want. Yes, we all have the capacity of being bastards, of abstracting away from other people into a hell of isolation, of not giving a crap, but is that really what you want? Are those the values you want to create?

In either case, if someone is resolutely immoral: he understands that his actions would be considered "unjust" by ordinary lights but simply doesn't care, then there is really no arguing with such a person. He is venal, he is a cad, he is a bastard. We can label him, judge him, shame him, put him in jail, but we can't really honestly say that he's "obliged" or "required" to be other than he is.

If a proponent of traditional morality (who is not a theist) feels like this isn't enough, that there has to be some objective property that makes his actions "wrong" under some global rule, then Anscombe and Sartre might just tell that person to grow up, to shift to a new meta-ethical paradigm, because the particular flavor of your indignation is out of date.