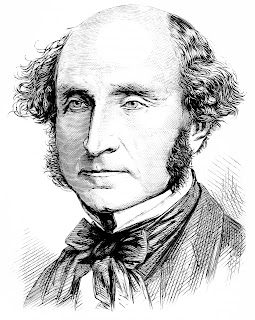 This month's Intro Group reading will be On Liberty by the nineteenth century British philosopher John Stuart Mill. There couldn't be a topic more relevant  to our politics today. Consider the fact that in our national discussions communities that make life difficult for individuals (who don't fit for one reason or another) are presumed to be oppressive and wrong. It's generally not thought that the individual should just suck it up and conform. People should get to do what they want, provided they aren't hurting anyone else, and they should be allowed to join forces with whomever they choose in order to speak truth to political power. This fundamental default assumption has been long fought over and hard won, and we owe much for the victory to the writings of Mill.

Many thinkers have raised-up the individual as the most relevant moral unit, but few have put pen to paper so pointedly to formalize the political argument in favor of such. Most of those who have have walked the trail Mill blazed. In the reading, we'll surely gain insights into our own political struggles, as On Liberty is a perennial contribution to the ongoing project of deciding how much power the government should wield and how much freedom the people should retain, and after all that, how best to think of ourselves in relation to the people and groups around us. Though Mill's writing is distinctively historical, these problems never get old.

We'll congregate in the Not School Intro Group forum and wrap up near month's end with a  Skype discussion (unrecorded). The prose in On Liberty is charmingly old-fashioned but still accessible to readers, and the work can be downloaded online in several places. Members and potential members alike, let's exercise our right to assemble and read On Liberty!

Check out the episode on Mill here.