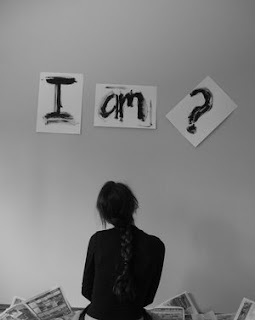 Sartre builds an obnoxiously robust case against humanity for its pervasive "bad faith," a deliciousÂ doublethink meal that our minds keep feasting on (one which we must forget we consume, and then forget that we made the choice to forget, and then forget . . . wait, what happened?).

His accusation is that we invariably deny our existential authenticity (that we are "condemned to be free") in favor of the ease and comfort of the everyday illusions that sustain our blissful play-acting and, as a result, we miss out on the "total involvement" that would bring us directly and irrevocably into meaningful existence (as we get to define it, should we take on the responsibility). To Sartre, "man is nothing else than a series of undertakings, . . . the sum, the organization, the ensemble of the relationships which make up these undertakings" (356). A fairly amusing categorical tone, given that he will complicate what man "is" by also suggesting that man is what he is not, or is what he is becoming (in that he is always transcending what he is), or is what he is not yet . . . .

Regardless, this statement about what man summons the wizard of lucidity himself, Martin Heidegger (I'm not even going to bother with his ontological ruminations). To him, these "undertakings" were our "projects," the possibilities toward which we exerted our care, which is "the fundamental constitution of Da-sein" (312). But one possibility we might foolishly pursue is a "bad faith" mockery of our Da-sein: the everyday Da-sein that permits us to elude the very thing that makes our Da-sein our Da-sein. As he says:

InÂ Angst about death, Da-sein is brought before itself as delivered over to its possibility not-to-be-bypassed. The they is careful to distort thisÂ Angst into the fear of a future event. Angst, made ambiguous as fear, is, moreover, taken as a weakness which no self-assured Da-sein is permitted to know. What is "proper" according to the silent decree of the they is the indifferent calm as to the "fact" that one dies. The cultivation of such a "superior" indifferenceÂ estranges Da-sein from its ownmost non-relational potentiality-of-being. (321)

The recent passing (notice my inauthentic, evasive euphemism for death) of Philip Seymour Hoffman and the subsequent responses reminded me of Heidegger's (convoluted?) account of this "bad faith" posturing toward death, which disavows the reality that Da-sein is Being-toward-death. Through this stance, we all get stuck echoing the same insipid sentiments about death and about the individual whom it has claimed. In thinking we are somehow brought closer to that individual through death, we in fact use the death as a vehicle to drive ourselves away from our own mortality. We say "poor so-and-so," shake our heads and look down in lament, while in our minds, we are urgently fleeing what we need to face. But in line with Sartre's self-deceptive mode of "bad faith," we don't ever reveal to ourselves this escape. And since we're all doing it, since we've all readily adopted the "they" self as "my" self, we're stuck.

Heidegger goes on from here to add, "entangled, everyday being-toward-death is a constantÂ flight from death." The primary concern that Heidegger and Sartre (and let's say Existentialism) share is this apparent cowardice in failing to confront death and, in turn, our responsibility for life. Yes, we know death happens, and yes, we know we're going to die, but we can push that knowledge into a nebulous future (or a nebulous virtual social reality) that we don't ever have to face, and because we don't face the possibility of our impossibility (when we are no longerÂ being), because we don't orient ourselves toward the only true direction we're headed (death), our lives are elaborate lies. Worse, as mentioned, we forget that we build such an extensive artifice to shield ourselves from the "ownmost potentiality-of-being not-to-be-bypassed" (322). Is it strange that Heidegger had to be so labyrinthine in his description of death (which is already an abstraction)? Is it ironic, or was he being ironic through it?

So how do we avoid "bad faith?" Always have death in a somehow unabstracted form breathing into ourÂ Angst-y, open mouths? What does it mean to accept death as a personal certainty? It makes sense that it's hard for us to be responsible for who we are when nothing's at stake, when we don't acknowledge death's imminence. The misconception that most people conclude from this Existential view is that it means you have to be cynical or pessimistic, which is a gross appropriation of "authentic," but one that makes sense within the paradigm Sartre and Heidegger define. If I can dismiss a quest for authenticity as bent toward misery, I can excuse myself from the onus of responsibility that my existence promises me. If I can categorize a philosophy of grounded optimism as angsty (or reductively adolescent), I can flee the freedom it urges and "enjoy" the illusive freedom of the "they."

As Nassim Nicholas Taleb (a subject I've addressed in a previous post) might argue, without "skin in the game," our actions are meaningless. Death is the only real catalyst for getting our "skin in the game." Without its steady (not distant) presence, we have no urgency to prioritize our cares or our possibilities, and so we have no urgency to prioritize our Da-sein, leaving us as dreadful shadows of our true selves. T.S. Eliot's image of hollow men creeps into my mind . . . and perhaps it is that our world will end with a whimper through inauthenticity. But what "bang" would authenticity bring? Is it worth it?