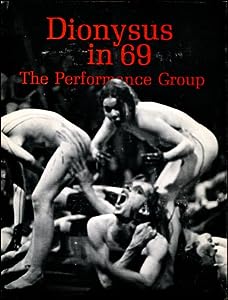 Moving away from just reading plays and more toward theory, the Not School Theater group in March had a look at the work of theater director and performance theorist Richard Schechner.

Daniel Cole, Philip Cherny and I discussed a video of The Performance Group's Dionysus in '69 (you can buy the text here

, a very loose adaptation of Euripides' Euripides's The Bacchae.

In addition, we read Schechner's essay Drama, Script, Theater and Performance (which you can purchase in the collection, Performance Theory

), in which he basically tries to do two things: 1. Establish a classification of the aspects of various social events in the four categories named in the title. 2. On that grounds, explain the relation of the performing arts to ritual, play, hunting and warfare, in concepts taken from ethology as well as from anthropology.

The discussion began with a rare attempt to summarize the text in an orderly fashion and understand the basic concepts first, as Daniel had read some completely different essays by Schechner instead (which, if anything, enriched the further discussion). Then we quickly went into going back-and-forth between aspects taken from the text and from the Dionysus in '96 performance: How does reality relate to theater, and how to ritual/religion? What is play? In what manner can a theater audience be "drawn into" the performance, and what ways are there to accomplish that? Are the states of distant observation and total involvement (as in: dancing and making out with the performers) mutually exclusive? Are they maybe both realized simultaneously in the scene of the birth of Dionysus at the beginning of the performance, which we found particularly impressive?

PEL Citizens can go to the Free Stuff page to listen to the discussion. Not signed up? Go do it, and you can also join our group for the next discussions: We are reading Bertold Brecht's essay "Theater for Pleasure or Theatre for Instruction" in April, and most probably Antonin Artaud in May. We may very well also revisit Schechner at some point in the future, since we pretty much agreed on that at the end of the conversation, so if the above made you curious about him, keep an eye out!