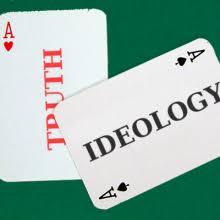 In the ordinary business of science it is reasonable to claim that the moon causes the tides, and to refer to empirical data as evidence. In the ordinary business of literary criticism it is reasonable to claim that Gordon Geko was greedy or that house elves are moral stand-ins for the peoples of our world who are enslaved and oppressed – and to refer to various theories of literature, psychology or intuition as evidence. In these worlds of study the criteria according to which claims are deemed reasonable are both intuitive and well understood.

This ubiquitous para-empirical analysis is concerned with the interpretation of events. It is a mode of reasoning and understanding we all rely upon to make sense of the world, a process which constructs fictions fully analogous to literature (and it is on similar grounds Lacan avers, “truth has the structure of a fiction”). This highly politicized activity, however, is not a deliberate affair: what you find important will determine what you include in your account. If it seems to you that gun ownership is a major social problem, then the involvement of a gun in some “disastrous event” will be a key feature of the narrative you construct.

It is this mechanism of narrative generation that those invested in political struggles employ. From feminists to men's rights activists, from corporate lobbyists to Noam Chomsky - politically invested actors try to co-opt this process for their own ends. Not intentionally, however: a feminist does not decide “here's a cunning narrative” and then seek to push it – rather, he is himself convinced of the narrative and, finding it Moral, Good and True, feels a moral pressure to convince others of it. If the world is truly immoral in some fashion, it is right that this immorality be pointed out.

Disinterested studies of this process are possible (“critique of ideology”), but are usually filled with tremendous amounts of theory to paper-over the lack of a successful general approach to culture. The key problem is then how to unpack the narratives to resolve their contradictions and internal inconsistencies (and how to select “the best”). What's pressing, however, is that not only must we find a way to do this, but that it ought also to be successful in pre-existing old and new media war grounds: we need to be able to construct the right narratives in a world so often constructing the wrong ones. I believe some, such a Zizek, have brought us quite far in the key problem; but few have had much luck with the pressing one.

In discussion forums, at dinner parties and on CNN, politico-pen activists set up before the facts arrive and determine to offer an account which highlights their cause; of course, by the end everyone has agreed it's a “complicated situation” with “many causes” and “who knows” and so forth. The activity of debate here seems largely to deal with that moral impulse outlined: in being initially convinced of their narrative, they feel a psychological moral pressure to offer it up, and having done so can move on. Everyone gets their chance, and in the end we smooth over the argumentative fallout with amicable nods to the infinite complexity of all things (a re-appropriation of God's Mysteriousness for the Chardonnay classes).

Amongst these groups a recent slate of murders has provoked a great deal of reaction; here the motivations of the killer seem to be varied and complex. What counterfactuals are offered? If there were no mental health issues, this person might not have been homicidal. If there were no gender oppression, this person might have not killed anyone. If there were mental-health background checks on gun ownership, this person might not have killed anyone. These are our empiricist intuitions desperately clinging to the scientific mindset, in which a cause is merely that which, if present, elicits an effect (the ball was kicked, the ball moved; if the ball had not been kicked it would not have moved; therefore kicking caused the ball to move). The problem we face is that these counterfactuals are themselves prioritized and constructed in the very same process which creates narratives (“ideological onto-genesis”).

One admonition, from the perspective of a candidate for a new framework, is to not “exceptionalize events.” War, for example, is the normal state of affairs for America – and yet each war is presented as an exceptional circumstance requiring unique, more extreme steps (this is also the predominant narrative surrounding terrorism). It seems a homicidal interaction between mental health and ideologies of inequality may also be normal in America (I shall leave this to the reader to ponder). If so, we should consider whether placing the mentally ill in a milieu of excellent mental health care, social equality and a society which severely limits the ease of intentionally killing people is better than the reverse: a society of extremely poor mental health care and social inequality, and in which the tools of homicide proliferate. If these Events are exceptions, however - if society should just go on around them - are we able to make any political statement?

There are many forces in an Event and maybe the best we can do is say that they have interacted. Yet from this interaction two questions arise: 1) What is our Culture (or, from what has this Event emerged) ?; and 2) What might our Culture be (or, what do we need to change)? If we are going to answer these questions, however, we must first establish the framework in which this can be self-consciously achieved.

Here we require a great deal of thought before offering up actions which merely run along the rails of oppressive narratives. Here activists caught-up in ideological warfare offer us nothing of use: they passionately push their narratives, each with its own contradictions and mythologies. They push analyses they produce in the environment of their own oppression, analyses which invariably have internalized and reflect the very immoralities they seek to address.

Here we require philosophers to interpret the world, in order that we might change it.