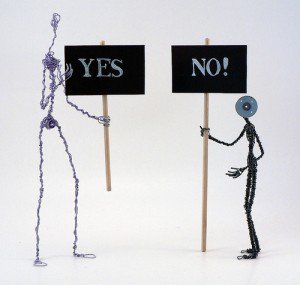 In our ep. 99, Daniel Horne suggested we have more antagonist-guests, i.e. people with entrenched positions that we know we disagree with: a hard-core Marxist or libertarian or Christian or pro-scientism person. OK, we did already do the last of these, and listeners will know already how that turned out.

One can point, as we did on ep. 99, to crap like Crossfire as having degraded and despoiled the debate format, but that's not a definitive criticism. Is it merely because we want to keep things cordial? Well, there are plenty of very nice though very opinionated people we could bring on, and certainly we don't have a problem with that when we regulars have a particular beef about something. Or maybe we just don't want to have to defend our views? Well, our views as voiced on a particular episode are typically about the interpretation of some textual passage, or whether or not some author's concept really makes any sense, or whether the take the author has chosen is really an effective way of making a point at all. In most cases, what's most effective and least irritating for an audience is for us to articulate these views in as much detail as their importance in the overall discussion deserves (which means sometimes we just gesture at some point, and sometimes take the whole discussion to hash it over) and let you all decide. This articulation and counter-articulation may or may not resemble an argument or debate as it's normally recognized.

Key here is the difference between a specific claim and an overall point of view. We all know that you can't effectively argue someone out of his point of view, at least within a particular discussion. You'd have to be a mighty poor Christian (or atheist, etc.) to be converted by a particular argument. You don't get turned from an optimist to a pessimist, from a conformist to a radical, or from a democrat to a republican overnight, unless your initial views were pretty thoroughly unexamined.

But an individual claim should be arguable, right? Global warning is real or it's not. The social contract is a bullshit concept or it's not. Derrida is a huckster or he's not. Well, as the sequence of my three examples there was supposed to show, individual claims are not always so easy to extract from a larger point of view. The social contract takes many forms in different authors, and it's much easier to focus on someone's particular argument for it than to say categorically that no argument for anything like the social contract will work. And "work" for what purpose? Am I trying to convince you to simply pay the taxes you legally owe (and to affirm that it's just to do so)? Or am I trying to convince you that you have the obligation to enlist in the army, or not to run away when you're drafted?

When I was looking recently at Thoreau's "Civil Disobedience" I was initially turned off by the anti-government rhetoric ("The government itself, which is only the mode which the people have chosen to execute their will, is equally liable to be abused and perverted before the people can act through it."), but then quickly realized that he was specifically concerned with a) the war of his day, and this was of course in the time of the draft, and b) slavery. So instead of arguing with his wording ("is equally liable"? How could someone possibly support that claim as stated in a convincing way? It falls into the "bullshit generalization" category that philosophy was designed to save us from), I can agree with the thrust of his views. Specific claims have a context, and that is the individual's overall world view. Conflicts in world view are often conflicts of emphasis.

Consider Wes's beef with Michael Sandel in episode 97: His argument was that Sandel had misrepresented Rawls's overall point: Rawls was trying to establish some minimum principles that widely differing people would agree to in order to found a society. Sandel was arguing that this whole project is ill-conceived. Given that we're in a society, given who we actually are, and all we have in common, there are things that it would be best for us as a group to promote, i.e. human well-being according to our common telos (our nature). Each thinker can grant the bulk of the claims the other makes but add "but that's not the point." The argument is not primarily over the truth of particular sentences, and getting bogged down in arguing over one particular one would be beside the point. The argument is over emphasis, about relevance, about emphasis, ultimately about one's goals in telling a philosophical story, which is a part of, for lack of a better term, world view.

On the one hand we have the rigorous ethic that says "if you believe something rationally, you need to stand up for your convictions and argue for it." On the other we have the ethic that says "my world view is me, and you disrespect me if you try to silence my voice with attacks" (this latter might seem foreign to readers here but is dogma, for instance, in the domestic violence intervention program that my wife attended). These are two sides of the same bogus coin, misrepresenting the process of gaining knowledge as a matter of conquest to be either embraced or repressed.

A better model for philosophy is "I'll show you mine, and you show me yours," where two or more different visions are articulated, each responding in part to the last, pointing out points of agreement or difference where illustrative, but not pretending to be able to fully deconstruct and refute the other's view. We see this on display in The Symposium, where Socrates's bullying is much less of a factor than in any other Platonic dialogues, but really all of Plato's work insofar as he's interacting with the reader (and not Socrates with his stooges) displays it as well. Yes, challenge your beliefs; listen to other people and take their concerns and counter-points seriously, but the reflective equilibrium involved is yours: these are your beliefs, undergirding your life, that you need to live with, and any tipping of the whole tray is your own doing, even if it's in reaction to some or another great author (or podcast!) that you've just discovered.

We learn formal logic and argumentative fallacies as a type of laboratory grunt work: we learn to see when someone is using a slippery slope argument (but of course, aren't some argumentative slopes actually slippery?), or confusing correlation with cause (though causation is often a perfectly reasonable hypothesis given observed correlation; you can't know without more testing), or overgeneralizing from a too-small set of cases (not that induction isn't often necessary, helpful, and/or the best we can do), but the scenario whereby you can lay out all of your opponent's arguments in symbolic form and show where the fallacies occur is mostly mythical, unless your opponent is a five-year-old. Popper gave us a model whereby scientific generalizations are refuted by countervailing evidence, but Kuhn pointed out that this pretty much never happens, that accepting something as countervailing evidence as opposed to an unexplained anomaly involves some larger change in world-view.

Learning these fundamentals helps us develop critical skills, and likewise a high-school debate format is useful... for people in high school. A debate like the one between Bill Nye and Ken Ham (discussed in ep. 96) can yield a few interesting facts or argumentative strategies that you can then regurgitate, but its primary purpose is as a gladiatorial display where each team roots for their guy. So I do think that we have something to learn from hard-core X's, but a real engagement with those ideas is going to be best done by reading their work and engaging with it deliberately, as we did with Ayn Rand and the New Atheists, rather than getting someone similarly belligerent on the show with us and "taking him on."