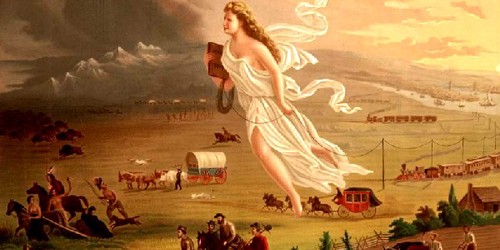 Our present relationship to technology can hardly be compared to the situation Thoreau faced in 1854, when Walden was first published. American attitudes toward nature began to shift in his lifetime, as steamboats and railroads appeared on the scene. The advent of such penetrating technologies meant that the ordering force of civilization had gained a powerful new advantage in its ongoing efforts to tame the wilderness. Before these developments emerged in the middle of the 19th century, nature was seen as a wild and dangerous obstacle to travelers and to the advancement of civilization. But in this period American authors (and painters) took a romantic turn and began to see nature as a place of sublime beauty and spiritual renewal.

In Walden Thoreau hopes that his experiment in living a natural and simple life at Walden Pond will teach him to see either "the whole and genuine meanness of it" or to see "if it were sublime." His famous project was aimed, among other things, at weighing the advantages of civilization and technology against the value of nature and simplicity. He ventures out to the edge of town just two miles from his home, builds his cabin on Emerson's land, and attempts to inhabit the edge of both worlds.

We, on the other hand, live in a post-industrial urban nation, on an urban planet, where most people are city dwellers and many people feel the need to fight to save what's left of nature. The smoke and noise of 19th century steam engines seem quaint now that we measure annual carbon emissions in billions of tons. The environmental movement began to take shape approximately 100 years after Walden was published. The Resources and Conservation Act of 1959 was one of the first major milestones. In 1962 Rachel Carson's Silent Spring greatly expanded the scope of this movement. Her book focused on the environmental impact of chemical pesticides like DDT. Large chemical companies like DuPont were harshly critical for a year or so but Carson's book received a series of prestigious awards in 1963 and it was still casting a long shadow when the Environmental Protection Agency was first formed in 1970. It has been included on many lists of the 20th century's greatest works of non-fiction. Robert Pirsig's Zen and the Art of Motorcycle Maintenance (1974) is set in this period, depicting a road trip that occurred in 1968 and humanity's relationship to nature and technology is a key theme in the book. A paperback copy of Walden is among the items packed for this father-son road trip.

After a while I reach into my pack for the paperback by Thoreau, find it and have to strain a little to read it to Chris in the grey rainy light. ..What happens is I read a sentence, he comes up with a long series of questions about it and then, when he's satisfied, I read the next sentence. We do this with Thoreau for a while, but after half an hour I see to my surprise and disappointment that Thoreau isn't coming through. Chris is restless and so am I. The language structure is wrong for the mountain forest we're in. At least that's my feeling. The book seems tame and cloistered, something I'd never have thought of Thoreau, but there it is. He's talking to another situation, another time, just discovering the evils of technology rather that discovering the solution. He isn't talking to us. Reluctantly I put the book away again and we're both silent and meditative. It's just Chris and me and the forest and the rain. No books can guide us anymore.

By the time Zen was published the hippie movement had mostly come and gone. This subculture is famous for its anti-war stance, its support for civil rights and feminism, and also for its love of sex, drugs and Rock and Roll but slightly less obvious was their vague back-to-nature aesthetic and ethos. The hippies often imitated the styles and fashions of native Americans or other primary cultures, as they imagined them anyway. You know--bare feet, headbands, love beads, fringed jackets of animal skin and, more to the point, these styles reflected an aversion to technological society and a love of nature.

This is the context in which Pirsig's narrative is set. The novel's "plot," if we can call it that, centers around a cross-country motorcycle trip with his young son and two of his technology-averse hippie friends. These friends "and millions of others like them" don't have any real solutions, he says, except at a personal level wherein they simply abandon "square" culture altogether and operate on feelings instead. In real life the Sutherlands were not hippies (although John Sutherland was a drummer who remained unpersuaded by Pirsig's defense of technology) but this characterization helps to set up a series of dichotomies: art and technology, hip and square styles, romantic and classical thinking. Pirsig's solution entails a fusion of each of these opposites, with the fusion of art and technology already being suggested in the title of the book. The hybrid form of the book can even be seen as a kind of performance of this fusion in the sense that it is a philosophical thesis embedded in a novel, an artful form of rationality. Like Thoreau's Walden, it also contains a strong autobiographical element. For Pirsig, the problems with technology are symptomatic of a larger, deeper problem. Our Western modes of rationality are at the root of the problem and so his solution to a cultural crisis is focused on an analysis of rationality itself. "A study of the art of motorcycle maintenance," he writes, "is really a miniature study of the art of rationality itself."

Despite his published complaints that Walden is "talking to another situation, another time," Pirsig's work is part of the same Chautauqua tradition and in real life he's actually a pretty big fan. As was mentioned previously, a few years ago I wrote to ask Pirsig what he thought about Emerson in particular and American Transcendentalism in general. Pirsig wrote back, saying he agreed with Emerson to some extent but that "there is always a whiff of ministerial unction in his rhetoric." Pirsig continued, "Thoreau never sounded unctuous and I could read him forever." Similarly, he had recently visited Emerson's house but the most interesting thing about the tour was what he learned about Thoreau--and Zen Buddhism.

The best thing I took away from Emerson's house was a story. When Thoreau was about to walk down to nearby Walden Pond, Emerson offered him a walking stick. 'No' said Thoreau, 'That's too much company.' What an insight into him! 'Simplify, simplify,' he said. 'As he simplifies his life, the laws of the universe will appear less complex, and solitude will not be solitude, nor poverty poverty, nor weakness weakness.' This likeness to Zen is overwhelming.