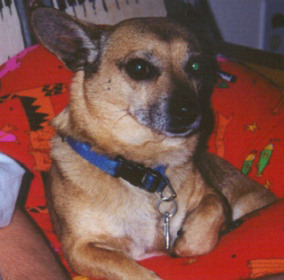 Listen to Stoobis in the Sky (or right-click/shift-click this link to download).

For our episode on the sublime, since the 12 Days of Xmas was going to be way too long, I opted to complete a song that I'd been wanting to finish for a while about my dog Stoobie, who hit the high trail in the summer of 2011 after 16.5 cute but irascible years on this earth. I wrote this a month or two afterwards, and it seemed a fitting conversation piece in light of our discussion here about grief, which I found to be perhaps the unraveling of Burke's attempt to found pleasure and pain as two distinct realms, each with its own aesthetic phenomena.

However, the way in which I completed the recording over the course of December may have undermined my intended point. So, my original singing/acoustic guitar, recorded at the time in 2011, was ragged, and intentionally so, a la Alex Chilton's ragged adventures here and here. I think of this style as "drunken," even though for my part, no drinking is typically involved in producing the effect (I would likely simply go to sleep instead of recording if it were). So my singing was a little out of tune, my strumming a little out of time, and I was ready for some big, stupid, dissonant lead guitar. The point being that plenty of the music I like does NOT aim at beauty exactly, but at a fractured, human imperfection. This song is about grief, but its expression, while not exactly ironic, is supposed to channel some punk spirit, and certainly humor. (Witness by comparison one of my inspirations: They Might Be Giants doing songs about loss here and here.) Though not sublime in the sense of big and scary (a la Opeth or Peter Gabriel's "Intruder"), I think the drunken, swearing path provides an alternative aesthetic point of view that I suspect was lurking in one form or another back into history (so long as there have been drunken, bawdy, poignantly broken minstrals), which cannot be dismissed as Burke might want as simply rude and so aesthetically worthless.

But this Stoobis recording I think really marks the turning point in my use of a geographically remote band, in that of the six other people that played on this recording, only the piano player Rei Tangko (whose violin you'll remember from ep. 100) was in the room with me when we recorded (his part was the last added). I had one of our listeners (Monica Serra, whose material you should hear here) sing backup instead of just blurting a part out myself as I usually do, had her cohort Terry Bacon ONLY play the organ part even though he was fully capable of playing the piano and the bass parts as well, outsourced bass to my old Mark Lint & the Fake bandmate Sam Ray (whom I've not played with in any form since leaving Austin in 2000!). The drums were by my Ann Arbor bandmate Steve Petrinko, and the lead guitar by Dave Roof, the first guitarist for my college band with Steve, The MayTricks (he played on our initial demo in 1991). So this is for me is a wealth of excess, and in combination with some other experiences over the last year has gotten me to actually prefer not having a band any more and instead drawing on this extended group of musicians whose week-to-week devotion is not necessary periodic one-off recordings. Yes, I'm a pretty picky producer/arranger when in the same room with someone, but ultimately just typically prefer writing singer-songwriter song frames and having people do whatever interesting things they want over it, and if I don't like it, I can kill or change it in the mixing stage. So while this certainly isn't the first time I employed this remote-musician strategy, it's the first time I did it for almost every single element of the song so as to simulate a virtual band. If you yourself are a quick-learning, recording-ready musician who'd be interested in collaborating with me in this way, please drop me a line and tell me what you do.

So Burke identified grief as in the realm of beauty, not the sublime, because it's ultimately about the pleasure of thinking about the departed, not about feeling actual pain. While of course there are many beautiful requiem-type songs, I set out to put down something that, yes, still uses major chords and other hallmarks of beauty, but wasn't aiming at the beautiful, but was instead going for this kind of grief juxtaposed with something at least related to the awareness of one's own death and being bummed/pissed/bemused/reckless about that, which sounds very much like what Burke should mean when talking about the sublime as related to the fear of death.

However, whatever direction I did (or in most cases didn't) give to the other musicians, they unfailingly sent me back parts that were really pretty darn beautiful: very melodic, with great, fat tones: dynamic and full. So I put in the time during mixing to straighten out the inconsistent rhythms set in motion by my unsteady foundational guitar and selectively pitch correct my vocal (though not the too-warbly vibrato, which auto-tune makes sound worse), and though the result is still somewhat shambling, the combined effort of all these folks was much more effective to my ears than anything I'd envisioned.