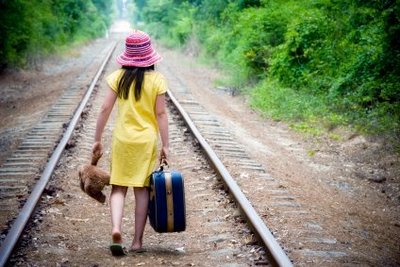 Listen to Run Away (or right-click/shift-click this link to download).

I've previously written about this song, and how I wrote it when I was 16, and it was the first song of mine that was any good, and we performed it at the high school variety show. The "final" recording version from that came out in 1989 (listen to it here).

But I couldn't help but think something had gotten lost in the translation from my nice, home acoustic version (horrendously recorded, of course; I'm not going to upload it) to that over-synthed version, so my college band The MayTricks recorded it for our initial demo in in 1991 and for an album in 1993.

My equipment has improved much since then, of course, and I set about in 2005 trying to record the definitive version, trying to return to my original vision of the song as, purely acoustic, with no drum kit and no guitar solo, with me playing everything, except I recruited my sister-in-law Valree Casey, who was an oboe major in college. I also got my father Bob Linsenmayer to add some vocals to the end.

And there it sat for a long time, until now, when our Whitehead episode needed a tune, and... well... "action of the day" vs. Whitehead's "events." OK, so it's a pretty tenuous connection, but it's a pretty little song. In these latter days I added more percussion, re-did the 12-string-guitar (incidentally, there the rhythm part is a ukulele, the only time I think I've ever recorded myself playing one of those), got my daughter Mina to put some more backing vocals on, and of course tweaked and mixed the bejesus out of it as is my wont.

So despite the very cheesy lyrics, this is still a favorite among those I've written, and it has certainly occupied enough of my brain space over the years to deserve a properly recorded version.