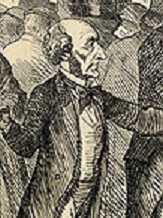 This post in the second in a series on Science, Technology, and Society. The first post is here, and the following post is here. All posts in the series have previously appeared on the Partially Examined Life group page on Facebook.

"We begin by making any supposition, even a false one, to see what consequences will follow from it; and by observing how these differ from the real phenomena, we learn what corrections to make in our assumption."

John Stuart Mill (1806 – 1873) was an English political and epistemic philosopher. His father, James Mill, was a respected philosopher in his own right, and raised his son to follow in his footsteps. Mill was thus equipped, by both nature and nurture, for the life of the mind. He did not disappoint – he is usually regarded as the most influential philosopher of Victorian Britain. He made important contributions to mathematics, logic, epistemology, psychology, ethics, liberalism, feminism, and – our subject here – the philosophy of science.

In A System of Logic

(1843) Mill proposed what has since become the standard description of a scientific explanation, called the Covering Law Model. According to Mill, science is concerned with the discovery of regular patterns in experience (laws), and a scientific explanation of a fact is one that fixes its relationship to such laws. As we gain experience in detecting these laws, we observe that certain features of investigation are more conducive to discovery than others. We might, in other words, propose a law about the discovery of laws – the Scientific Method. This method is, simply, to use inference and inductive reason to create a set of hypotheses, and then to use deductive reason to derive from them likely consequences. We then perform an experiment, and on that basis we eliminate or revise our theories until we arrive at the true explanation.

This method rests on two assumptions: that of Determinism (a discoverable cause for the phenomena does in fact exist, and requires the phenomena to exist where it is present), and that of Limited Variety (that cause is embedded in some way within the available hypotheses.) We can infer that these assumptions are indeed applicable from the explanatory success of the laws already discovered (or in principle discoverable) on their basis. Each new discovery which expands upon and agrees with earlier discoveries provides confirmation both of them, and of the assumptions of Determinism and Limited Variety.

Although Mill is interested in logic, he does not believe that scientific discoveries must be grounded in logic – because logic is embedded in the deep structure of the universe, and because that structure is known principally through experience, we know that a law which accords with experience is logical. It is not necessary to work out the specifics.

Science proceeds, according to Mill, in two ways: by filling in the gaps between theories, and by rearranging structures of theories. For instance, we can know at what temperature water boils from experience, and we embed that experience within an elementary principle. However, if we want to discover the effect of air pressure on the temperature at which water will boil, we need to invoke additional theories about air pressure and the nature of the boiling process itself. A more general account of observation requires, in other words, a more complex structure of theories. Creating the elementary theories is a matter of “filling in the gaps” in our knowledge. If these theories seem to contradict (for instance, the confrontation between Newton’s and Einstein’s account of gravity), we can reasonably infer that there is a flaw in our structural arrangement. Locating and repairing this flaw then becomes the object of scientific investigation. A true and accurate structure of theories, then, will contain no gaps, and no contradictions.