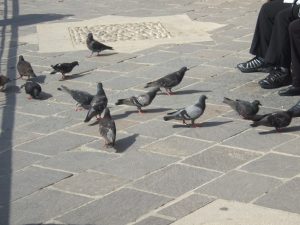 This is intended to be the first token of a new type of post at PEL: a roundup of recent philosophical activity on the Internet that may be interest to our readers. The introductions and comments provided here come from much-too-cursory readings of the things they link to; objections, preferably in the form of new blog posts, are invited.

; according to some folks who ought to know, "crumbs" is a better translation of Smuler than the "fragments" we're all accustomed to.

There's no better way to introduce Project Vox than to let it introduce itself:

Project Vox seeks to recover the lost voices of women who have been ignored in standard narratives of the history of modern philosophy.

("Modern philosophy" here is meant in the way that historians of philosophy use it: European philosophy in, roughly, the 17th and 18th centuries.) The site is meant to be a "virtual hub" for scholarship and teaching on the work of four philosophers: Lady Damaris Masham, Margaret Cavendish, Anne Conway, and Émilie Du Châtelet. For each philosopher, there are comprehensive biographical timelines and bibliographies of primary and secondary sources. Even more useful for teachers, it contains revised syllabi for several of the courses commonly taught in philosophy departments. Some of these revisions extend beyond the goal of including women's voices and speak more generally to altering the standard version of philosophical traditions and canons in light of recent scholarship:

The old idea that early modern philosophy is best understood as involving a grand debate between Continental rationalism and British empiricism is widely regarded as anachronistic, hailing largely from a post-Kantian idea of philosophy’s development. It is more historically accurate to say that early modern thinkers were interested in other questions, for instance, the distinction between what was then called the experimental philosophy . . . and the speculative philosophy. This version of the history . . . it enables the inclusion of . . . . the contributions to experimental philosophy by Cavendish, and to discuss Du Châtelet’s extensive discussion of the importance of, but also fundamental limits to, speculation and hypotheses in philosophy and science.

At Maverick Philosopher, Bill Vallicella begins a series of posts defending Heidegger against charges of nonsensicality from "analytic Heidegger-bashers." In this first post, he focuses on the example made notorious by Rudolf Carnap: Das Nichts selbst nichtet ("The nothing itself noths"). The core of Bill's argument is that sentences such as "There is nothing at all" or "Nothing exists," while false, and perhaps necessarily false, are nonetheless meaningful. Hence, contra Carnap, there are uses of the term nothing as a substantive that cannot be translated into statements in predicate logic containing a negation operator. He concludes with a quotation from Heidegger, and a challenge:

"Is there Nothing only because there is the Not and negation? Or is it the other way around? Is there negation and the Not only because there is Nothing?"
I grant that with questions like these we are at the very limit of intelligibility, at the very boundary of the Sayable. But you are no philosopher if you are not up against these limits and seeking, if possible, to transcend them.

At the Brains Blog, Dan Zahavi has a series of posts discussing the main themes of his new book, Self and Other: Exploring Subjectivity, Empathy, and Shame

. The book focuses on two different conceptions of the self: the social constructivist view according to which "one cannot be a self on one’s own, but only together with others, and the "experience-based, phenomenological, approach to self," according to which "selfhood is a built-in feature of experiential life." Zahavi argues that we don't have to choose; both are necessary to a full account of lived experience. In a post at Philosop-her entitled "Promising Sex," Hallie Liberto considers how the obligations creating by making promises apply in the case of promising sex.She argues that a promise to grant sexual favors, like any other promise, creates a promissory obligation, but, like all such obligations, is overrideable by numerous other factors:

I believe that the feature . . . that we find disturbing is that it seems to us that if John has been granted a right, then he may go ahead and have sex with Jane, even if she has changed her mind. However, what John gains is not a right to Jane’s body, but the moral authority to determine an aspect of Jane’s moral “landscape." John determines whether or not Jane will be wronging him if she fails to have sex with him.

This does not mean that John can have sex with Jane against her (present) will. . . . If Jane chooses to break her promise . . ., John may not force her to perform the content of her promise. He does not have a moral right to the sex itself.

At Aeon, Quassim Cassam brings the notion of intellectual virtues and vices, particularly as found in the work of Linda Zagzebski

, to bear on conspiracy theorists.

Eric Schwitzgebel is best known for his work in epistemology and philosophy of mind, and especially for his skepticism about the reliability of intuitions and the possibility of self-knowledge. But he does other things, too; currently, he's got a series of posts on Chuang Tzu (subject of PEL podcast episode #12). In the most recent post, he argues that Chuang Tzu's attitude toward death is inconsistent, but that that's no problem.