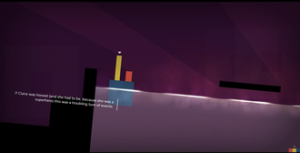 or [insert current reading here], think “I woke up too late to get coffee; the hell with this,” and turn your off your brain.  Good news; there are video games for your phone that will keep your mind engaged while you solve simple puzzles or kill monsters.

In all seriousness, this is good stuff.  These two games are engaging and interesting examinations of issues of personhood and ethics. And they can be played on your mobile.

Thomas Was Alone is a platform puzzler that chronicles the escape of artificial intelligence from cyberspace into physical reality.  The game itself feels lengthy, but is not very difficult. What makes the plot, and humorist Danny Wallace’s narration, so engaging is how driven the AI entities are to reach their unknown goal.  It is an extremely human story: exploration for the sake of discovery, from “What’s that?” to “Let’s go find out.”

The story follows Thomas and several other colored rectangular shapes with varying jumping abilities. The goal is to use the shapes’ differing skills together to reach the end of each level and

the long term quest of “reaching the great light” which, it turns out, is the internet.  It is the story of localized artificial intelligences who are clearly self-aware, conscious beings escaping a mainframe.  More serious quotes that provide a retrospective look at the importance of the in game events are scattered between levels. It is an excellent contrast, a lot of fun to play, and a much better AI story than Chappie.

A Dark Room (Which can also be played in browser ) is a much more morbid experience. It is an examination of who and what is used for personal gain, and how we, as moral actors, relate to our surroundings.  In terms of gameplay, it is a flashback to the dos games of the mid 80’s. With a gradually expanding rogue-like world made of nothing but alpha-numeric characters, ageing nerds will feel right at home. The gameplay alone is highly compelling, but the story that develops is the real meat of the experience.  It is difficult to get into the details of why it is philosophically interesting without divulging significant spoilers. So, if you want to play to whole game, just take my word for it, stop reading, and go play it.

In game, your “Wanderer” builds a little society with other “wanderers” in a small, seemingly post-apocalyptic world.  As the game progresses, your “villagers” abruptly turn into “slaves”, you realize that your battles are mostly you killing humans and human children who are hopelessly resisting your invasion, that you are a many armed alien, that your goal is to escape the planet where you crash landed after committing de facto genocide stealing all natural resources, and that you are generally an asshole.  The pacing of these revelations is fantastic and consistently jarring as no explanation or useful narration is provided. The experience, while cloudy, gives a window into how the personal drive can supersede established ethics and how ethical systems break down in one-sided conflicts.  More to the point, looking at humans as animals, whose slaughter bears no ethical weight, is an interesting jump.

Intellectually relevant video games are not new, but they are certainly under-represented  in mainstream discussion (and here on PEL).  These are just two of many examples, but they are excellent and not terribly time consuming.  Next time you feel bad about being mentally lazy, pull out your smartphone.  Thomas Was Alone and A Dark Room will make you feel much less bad about being lazy.