Nicholas Humphrey, professor of psychology at The London School Of Economics, is a leading investigator of  what philosopher David Chalmers dubbed the “hard problem” of consciousness.   His Recent book Soul Dust approaches the second part of the Hard Problem: why human beings have consciousness, and why consciousness should have evolved at all. It is an excellent read for anyone interested in philosophy of mind and the evolution of the brain.

While there have been many attempts to get at what consciousness is (or what consciousness is like, see PEL episode 21), the goal of  Soul Dust is describing why consciousness is evolutionarily advantageous--or, more exactly, why natural selection has led to creatures with the remarkable quality of being phenomenally conscious.  It is an interesting question given that being conscious (not to be confused with being intelligent) does not seem to grant any survival skills. As Jerry Fodor famously asked "What mental processes can be performed only because the mind is conscious, and what does consciousness contribute to their performance?  Why then did God bother to make consciousness?"

Humphrey’s solution is not terribly complex. Consciousness, he claims, does not add or enhance some survival ability (as, say, wings allow birds to fly).  Consciousness improves the chance of survival because it makes life worth living.  Being phenomenally conscious grants import, meaning, and ego, essentially fooling us into striving towards fulfillment. Humphrey makes this point by quoting several artists, writers, and theologians, such as Oscar Wilde: “The aim of life is self development. To realize one's nature perfectly - that is what each of us is here for. To love oneself is the beginning of a lifelong romance.”  Quoting Thomas Nagel, Humphrey points out the strange fact that “There are elements which, if added to one’s experience, make life better; there are other elements which, if added to one’s experience make life worse. But what remains when these are set aside is not merely neutral: it is emphatically positive. . . The additional positive weight is supplied by experience itself, rather than by any of its contents.”  To put it  simply, “we accept that nature made sex pleasurable to encourage us to have more sex. Then why not make living magically delightful in order to encourage us to engage in life?”

Humphrey further argues that the desire to “experience life” has “increased our fear of death.”  To quote Philip Roth, “I’m afraid of dying. . . I’m 72. What am I afraid of? . . . Oblivion. Of not being alive, quite simply, of not feeling life, not smelling it.” Consciousness fools us into believing that we are somehow individually unique and makes the experience of life, on balance, emphatically positive.  It also allows us to extrapolate from the deaths of others that we are going to die and that death is the loss of all experience.  This knowledge, something that nonconscious and less acutely conscious animals seem to lack,  makes being alive precious and something that needs to be actively defended and improved upon, even in the absence of immediate threats.

Humphrey asserts that it is this love of being alive and omnipresent fear of death that motivates us to fight for our “honor,” “legacy” and other abstract goals that just so happen to involve a lot of resource gathering, competition, and constructive activity that will positively affect our progeny.  As per Humphrey,  the more beautiful and meaningful life becomes, the harder the conscious creature will fight to improve and extend its own existence. And, the harder it will work to improve the likelihood of the success of it’s offspring.  Thus, being conscious is a huge evolutionary advantage and is explainable in a standard Darwinian framework.

Elsewhere in the book, Humphrey attempts to explain the how as well as the why--how consciousness developed and how it works. Much of this material is drawn from his previous work Seeing Red. But Humphrey stresses that this is the least of his goals with Soul Dust. His focus and attention is on the why. Humphrey confirms that he is on the side of Dan Dennett, Owen Flanagan, and other antidualistic thinkers who feel that neuroscience will probably answer the how in due time and that consciousness is entirely physical. His theory on the what and how is included mostly to avoid the criticism that he has totally ignored it, going so far as to say at the onset of the chapter on math and brain function that the reader can feel free to skip it entirely. 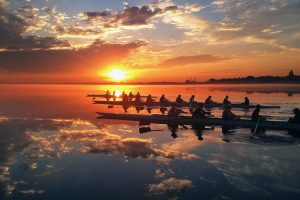 All in all, Soul Dust is a great read.  It is a comparatively easy to understand text and is a convincing argument (if you are willing to be convinced that you are an animal and that there is no “soul”).  For my own part, I have to say it makes a lot of sense.  There are parts of life that make me want more life, and it seems this is also true for people much less fortunate than myself.  If my love of say, very early mornings on Lake Mendota is a survival mechanism, it’s working.

You can find a lecture by Nicholas Humphrey summarizing the ideas of Soul Dust here: